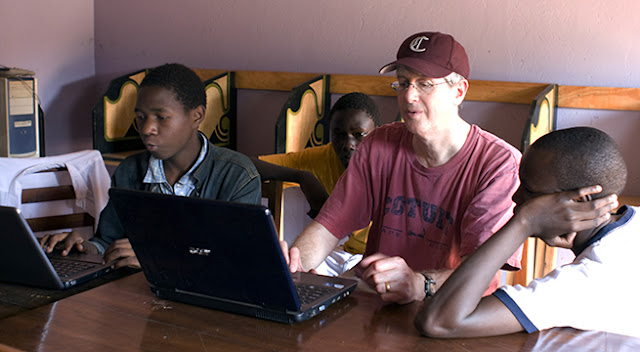 "The orphans of St. Mary Kevin span all age groups, but my initial impressions were colored by children toward the extremes – some of the youngest and some of the most mature. As we took the first steps in a tour by Rachel and Sheila, two of the older girls beginning to prepare for university entrance exams, a group of small children swarmed around me taking my hand and vying for the most fingers to hold as we walked from building to building. Since my own boys are at an age when regular such shows of affection such as handholding are a fading memory, the attention from these children was a real treat. The warm feeling lasted even when, after a while, the kids (all boys but for one adorable girl – Gloria) seemed to be using my hands and arms more as a jungle gym/launching pad for jumps and game playing with one another than as a source of warm human contact.

Their affection and silliness was a nice contrast to the earnest enthusiasm Sheila and Rachel displayed both about SMK and their academic ambitions. Commenting on my height, Sheila let me know she was very interested in genetics and would like to pursue a career in medicine. She wanted to know whether my sons are tall too. Rachel is interested in studying law. They both described grueling preparation for tests they will need to pass if they are to have the opportunity to advance to the next level pursuing their goals. They are mindful that such a degree of academic achievement is rare for women in Uganda and is made possible to them, at an orphanage, because of the generosity of Change the Truth supporters. In the end, their contagious excitement was no less innocent, no less endearing that the group of boys (plus Gloria) still giggling and dangling on my arms as we completed our tour."