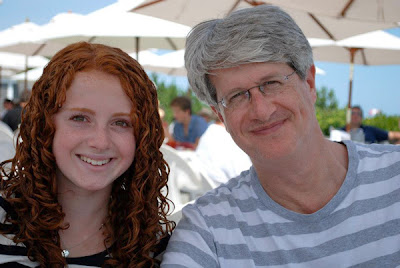 Following are the bios I received from my friends Leah and Josh. I’ve known their family for many years and could not be more excited that they are going to St. Mary Kevin Orphanage as part of Team 6. This has been a dream of Leah’s for three years now. I’m so happy for her that her dream is coming true, and that she will be able to share it with her awesome dad.
"Leah Sosland is 13 years old and attends school at the Hyman Brand Hebrew Academy, where she has been a student since kindergarten. Leah is currently in the 8th grade. Every summer, Leah goes to Camp Ramah in Wisconsin for two months. Leah has made some lifelong friends there, and the camp has also helped her expand her interests and education. She enjoys art, music, and especially literature and books. Leah has been playing piano since a young age, and loves to read. She also plays sports such as basketball, tennis, and soccer.
Leah first learned of Gloria’s work when she was 10 at a CTT fundraiser. She became very interested in CTT and was moved by Lynne Melcher’s beautiful film and the wonderful work of Gloria and many others. She decorated one of the banana dolls for the CTT fundraiser, making hers a piano teacher, standing beside a wooden piano. For her Bat Mitzvah project last February, Leah decided to raise money for Change The Truth Foundation.
Inspired by everything Change The Truth does, Leah became interested in going on one of the teams to St. Mary Kevin Orphanage in Uganda. She and her father, Josh, decided together to volunteer to serve as a members of Team 6 and are very excited to share in this experience."

*******
"Josh Sosland has been an editor for 29 years at Sosland Publishing Co. in Kansas City, writing primarily about the wheat foods industry in the United States. The principal magazine published by the company for the last 90 years is Milling & Baking News and deals with issues that include global food production and nutrition. Earlier this year his work took him to Haiti to write a feature article about the country’s only flourmill, destroyed in the devastating earthquake of January 2010.
In addition to his work in journalism, Josh has been involved in community affairs throughout his adult life. For more than 20 years, he was a director of the Community Blood Center of Kansas City, serving as president of the organization from 2000-04. He also has served on the boards of numerous arts organizations and has been active in the Jewish community.
Josh has known Gloria for nearly 20 years, first because she was his neighbor in Kansas City. It was while attending a Change the Truth fundraiser that Josh saw Lynne Melcher’s beautiful film about St. Mary Kevin Orphanage and learned about Gloria’s great work. Josh’s wife Jane and three children also were greatly moved by what they learned. It was the passion of his youngest daughter, Leah, that inspired Josh to volunteer to serve as a member of Team 6."

Posted by Gloria Baker Feinstein at 4:59 AM