Going through boxes of old papers and memorabilia (in preparation for our garage sale) means coming across things I haven’t seen or even thought about for a long while. This has included a couple of boxes that hearken back to the Baker Gallery years (1981 – 1992.) Today I waded through lots of old cancelled checks, inventory sheets and invoices. I think the most fun was stumbling upon correspondence with various artists and photographers. (That, and the interaction I had with collectors and photo enthusiasts was the best part of the whole gig.)

My exhibition of Jerry Uelsmann photographs was one of the most enjoyable shows I did. Uelsmann was a cheerful, unassuming and delightful artist with whom to work. He sent me letters on the back of work prints. This was one of his notes, on the backside of a beautiful. but not quite up to par, silver print. 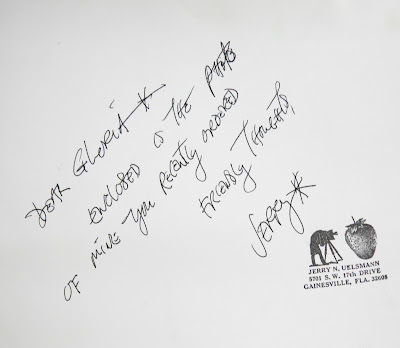 I've already written about my reverence for Helen Leviit. I put together an exhibition that included her, Cartier-Bresson and Walker Evans - one of my all-time favorite shows. Of the three, Helen was the only one with whom I corresponded directly (Evans was no longer alive and Cartier-Bresson had a rep.). Helen was totally accessible and very dear to me. This is a postcard I received from her at some point after the show had come down. 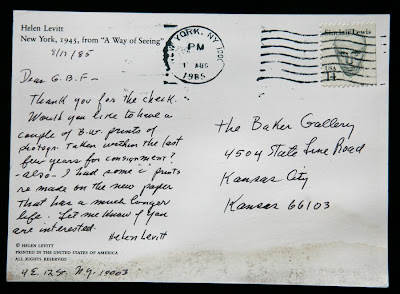 One of the sweetest photographers with whom I dealt directly was Aaron Siskind. From the start, he reminded me of my dad. 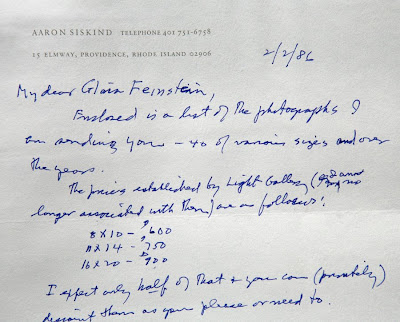 This is a good example of how low the prices were in the early to mid 80's for photographs by well known photographers. Winogrand's work was available then for what now seems like a song. It was a great time to be collecting photographs! This work now, if even available, is several thousand dollars per piece. 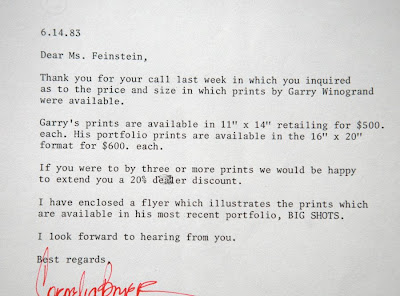 The biggest jump in price perhaps (of the work I carried) has been the group of Arbus prints that I showed in the early 80's. Clients from back in the day often ask me, "Why didn't you, I, we buy the whole show?!" My response is, "It's all relative. $600 or $700 seemed like a lot of money for a photograph back then." Some of us were lucky and did buy them. They cost, of course, tens of thousands of dollars now... if you can even get your hands on one. Here is the inventory sheet for the show I did. 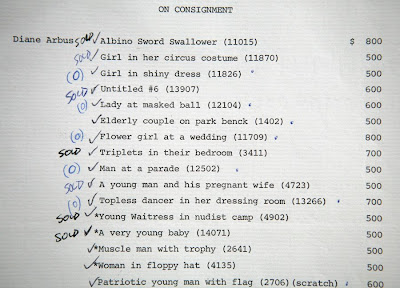 The two Annie Leibovitz shows I did really put me on the map in Kansas City. For the first show, in 1985, I brought her to town to do a book signing at the opening reception. That weekend was a blast! This photo of Annie was taken in front of the gallery by photographer John Trotter. I has completely forgotten about this gift from him until I bumped up against it in the box of Baker Gallery goodies I explored in my basement today! 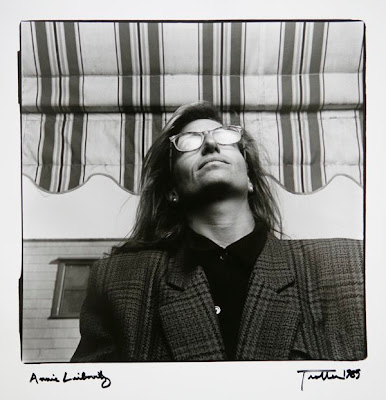