I've told this story to friends and family before. But you know how memories sometimes get murky, and often the more you tell the story the more fictionalized it can become. Well, I found the proof that backs this one up. (One definite advantage of having a garage sale and therefore seeing years and years of your past stream in front of your face as you sift through stuff that has been boxed up for ages.)

My cool older brother was having a dance in our basement. This was pretty exciting, especially because my parents even hired a DJ. My brother must have been around 16; I was about eight. Before my bedtime, I managed to sneak onto the stairs to sit and watch the kids dance, but mostly to admire the good looking DJ, a guy named Nick Clooney. He was a news anchor in Lexington in the early 60's. He was probably the most famous person I had ever seen in real life. I was already into music then, and at one point I got myself from the basement stairs right up to the table where he was playing records and told him my favorite song was "You Talk Too Much" by Frankie Ford. Just before being shooed away by my brother and then told by my mom I had to go to bed, Nick Clooney fished inside his box of 45s and pulled out the very record about which I had spoken. Before I knew what had hit me, he signed it "To Gloria, Good luck always" and placed it in my little hand. I had a lot of trouble falling asleep that night. 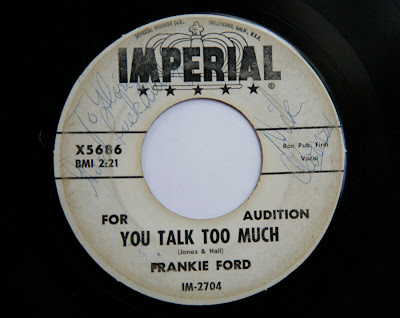 Nick was from a famous family: Rosemary Clooney was his sister, and then he went on to have a son, George.

I identified with that song and still can sing all the words. Maybe it was because I talked so much more than my little sister did. But I also felt that if someone could record a hit song with the lines "You talk too much, you worry me to death, You talk too much, you even worry my pet" I could accomplish big things in life.
Posted by Gloria Baker Feinstein at 1:23 PM