One of the really lovely benefits of being involved in a not-for-profit is getting to know others who share similar passions. I have been truly lucky to come into contact with many people who, for one reason or another, have actually spent time at St. Mary Kevin Orphanage. Small world, really, considering the mind blowing number of orphanages that fill the landscape of Uganda.

The wonders of the Internet have brought me in touch with people from all corners of the USA who have traveled the same dirt road up to SMK. One such person is from Illinois. Connie landed at the orphanage shortly after my first trip there and found me through a Google search. We have corresponded regularly ever since, and she has become good friend to Change the Truth. Here is her story: 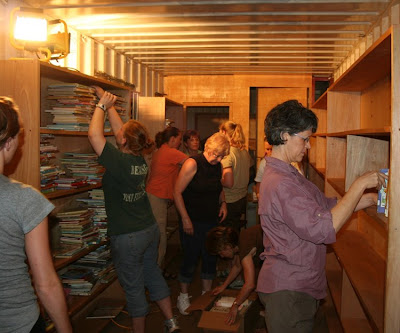 “I was part of the group that built the library at St. Mary Kevin Orphanage in 2007. I wish you could have seen that process. Most of us had never been to Uganda before, it was late in the day when we got there and had only a few hours to get all the books into the boxcar that had been made over into a room with shelves. We had already finished another library that day so were all pretty tired and hot. As you know, late in the evening is when the mosquitoes come out to play and we had no electricity so had to use a generator for a small light. We had no fan so the women lined up in the boxcar and passed books to each other for shelving and the men stood by with large pieces of cardboard fanning us to keep the mosquitoes at bay. What a hoot. Not at the time, of course, but after we finished and had time to think about it. We finished shelving the last books just as the generator ran out of gas. Perfect. The next day we went back and the men made those great benches that I've seen in some of your pictures while the rest of us went into class rooms and hung out with some of the kids. The only problem is that because we do all of these libraries in such a short time, we don't have a lot of time to make real connections with people. Because our group is so small this year we're hoping to have more time just to get to know people.

There are actually two teams going this year. The large group will be going two weeks ahead of us and will be putting libraries in two large schools in Mbale. Then five of us from Illinois will be going in on June 29 and will restock a library in one school, build a library in a high school, and then go to an orphanage between Kampala and Mbale to build a small library for sighted as well as blind students. From there we will go on to Mbale and will train the teachers and students about how to properly use a library. As you can imagine, the idea of a lending library is something that they don't fully understand, so it can be a challenge to be sure the library is used in the best way to suit their needs. The idea of borrowing, reading, then taking the books back, and trading for another one is hard for them. And, of course, many of them don't have homes to take the books to so we are building cabinets at the schools so they can be left there as well. This year, we are taking hundreds of globes and maps to take to the schools as well. If you'd like to learn more about all of it you can check out their web site at www.librariesoflove.org.”
Posted by Gloria Baker Feinstein at 3:04 AM

Gloria,
The blog looks great. Thanks for including me and giving a plug to Libraries of Love. They work all year long to collect, prepare books for the libraries (cataloguing,labeling, etc.) and working with people in Uganda to buy the lumber and prepare it to be made into shelves. In the few short years they've been doing this, they've made a lot of good friends in Uganda, just as you have. Because they are based in Texas, I only get to do the fun part, which is going and helping put the libraries together. I just think it's so cool when someone takes a burden on their hearts and turns it into a great way to make a difference in other people's lives. That's what you have done with Change the Truth and what Trudy has done with Libraries of Love.
Thanks again
Connie