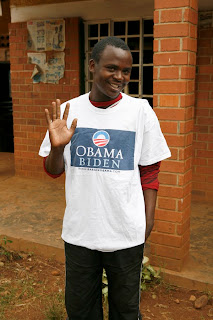 I’m heading to Portland for a week to get away with Eddie, continue work on my Streetcar Series, to begin work on a new book (more on that later) to deliver a show to Vancouver, Washington (more on that later, too) finally get to the Japanese Gardens, do some hiking and maybe even to dance in the very liberal Stumptown streets on Inauguration Day.

Parting shot: Emma Vincent, one of the older orphans at St. Mary Kevin’s who is being sponsored by Change the Truth, showing off the Obama shirt sent to him by his Kansas City pen pal. When we were in Uganda last month, cries of “OBAMA!” accompanied by triumphantly raised hands and occasional fist bumping were not unusual.

My little friend, Nicholas, who lives at the orphanage, asked me one day if I had supported Obama. When I told him yes, his whole adorable face morphed into one proud grin as he nodded and said, “So did I.”
Posted by Gloria Baker Feinstein at 9:48 AM