lynne/ a christmas tale from kajjansi 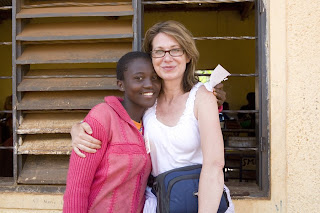 After weeks of interviewing the children and team members on site at Saint Mary Kevin, their voices competing with the background sounds of bouncing balls, drumming, and merriment, I finally got smart. In order to hear the compelling words being spoken, I needed to go elsewhere, to find a place of relative quiet, without distraction.

So, for each of these later interviews, I went into the hills of Kajjansi. This time I had only to compete with herds of cattle, roosters, airplanes, and teams of village children running and playing. Often, these groups of children came and sat quietly, watching and observing this strange “mezungu” with her large camera and list of questions.

On Christmas Eve day, I took young Sarah deep into the fields. I had never gone quite that far. Once again, a group of boys and girls sat on the edge of our makeshift “set”. And one girl came alone, from somewhere down the road, to join them.

At the end of our interview, which focused on many things, but ended with thoughts on family, one of the children in our “audience” stepped forward to talk to us. Her name was Saracetina.

She told us about her father, and showed us the scars from his beatings and attempted rapes. And then there was her mother, who had knowingly left her with her father when she remarried, as the new man didn’t want her around.

Sarah and I were stunned, mouths agape. Here was this beautiful young girl, only slightly older than Sarah, who had been through so much, who was essentially homeless, yet who nevertheless had a joyful presence.

Not knowing quite what to do, yet at the same time knowing exactly what to do, Sarah and I told Saracetina about Saint Mary Kevin, less than a mile away.

It was Christmas Eve. There was a lot of commotion at the orphanage. And, as I soon found out, there are procedures that need to be followed before an orphanage can lawfully take in a child, despite their horrific stories.

Though Sarah and I were both worried, it was Sarah who was especially concerned about this young girl’s immediate future, and her fate. They were peers, equals and friends, despite their differences.

At the orphanage, and throughout this trip, I have seen an almost instinctual capacity for kids to help other kids. Sarah, in her eagerness and efforts to get Saracetina to safety, showed me this in spades.

I have also seen an instinct for survival, though I don’t know if this is something innate, or something which arises out of need. Saracetina is a survivor. Like so many children in Uganda, and in all parts of the world, America included, she’s had to be.

Saracetina came to the orphanage on Christmas Eve. She sat alone, patiently, as the other children received their gifts. Rosemary followed procedure, and in due time, was given permission to take Saracetina in.

Cissy, one of the children at Saint Mary Kevin, shared her bed with Saracetina that first night.

By the next day, and in the days that followed, in an astoundingly short time, Saracetina could be found leading the young children by hand, helping them wash, bathe, or just play.

She looked completely at home, with her new family. Joy simply radiated.

Some children might have stayed on that road and kept going.

Yet on Christmas Eve, Saracetina gave herself the gift of help, and of hope. And she gave me, and gave Sarah, and the children at Saint Mary Kevin, so much more.
Posted by Gloria Baker Feinstein at 12:24 PM