In 2004 and 2005 I photographed identical twins for a series I called "The Space Between."

Aren't we all fascinated with the way people change over the years? "The Brown Sisters" by Nicholas Nixon has always been one of my favorite photographic series. Once a year, for more than twenty-five years now, he has photographed his wife and her three sisters grouped together in the same order, with a similar background; it gives the viewer the opportunity to marvel at how time has changed the women - and ultimately, of course, how time changes each one of us.

I've decided to revisit some of the twins I photographed eight years ago and make updated portraits. I hope to complete at least eight or ten diptychs for my show in May. I don't want to share all of them here (I'd like to have a few surprises at the exhibition!) but can't resist sharing the first two I've done.

Here are "Brian and Andrew" and "Martha and Mary." Incredibly, I was able to photograph them in the exact same locations as before. 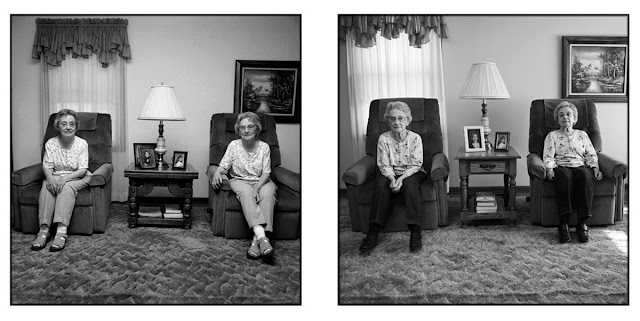 Did you ask them to pose?

Once I realized we were in the exact same setting, it made sense to me to have them reenact the previous portrait. Nothing changes, but everything changes.