Thirty-seven years ago, almost to the day, a bunch of my brand new University of Wisconsin college friends and I piled into the VW bus of this cool, heavily bearded, long haired older guy named Eddie to head up to Oshkosh to see the band Loggins and Messina. The concert was in the school’s gymnasium. 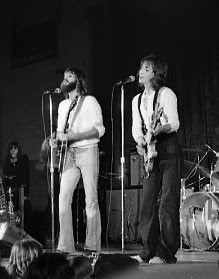 There were a lot of earth shoes and flannel shirts and macramé belts, and marijuana smoke drifted high above it all. Our merry group had a raucous good time singing along to the songs on our beloved “Sittin’ In” album. Loggins and Messina broke onto the scene in the fall of 1972 and spent that year touring a whole mess of college campuses. At all those college campuses, long-haired hippie freaks like us knew the words to all the songs, and we relished and cheered on each guitar riff and fiddle solo.

That crowd was reunited last night. Instead of stomping our feet on the floor of a college gymnasium, we were politely tapping them on the carpet at the Ameristar Casino theatre. We’ve all packed on some pounds, our hairstyles have changed length and color, our chins have multiplied and, well, you get the picture. It was bifocal heaven, but everyone there still knew each and every word to “Your Momma Don’t Dance”, “Pooh Corner”, “Danny’s Song”, "Vahevala", “Back to Georgia”, etc. 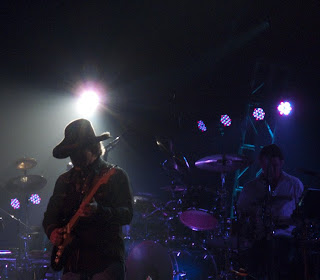 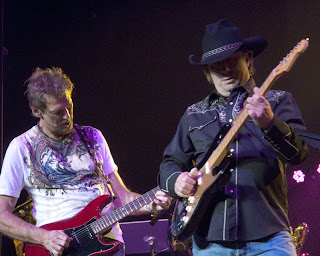 Messina, who already had a stellar career before he teamed up with Loggins all those years ago (Buffalo Springfield and Poco) still plays a mean guitar. His voice sounded good, too. He’s rounder, and his hairline is receding, and I think he may have a bad back, but hey, everyone in the crowd could relate. Loggins is still a rocker, dancing around on the stage like a young kid. His voice was wonderful, and the two guys can still harmonize with the best of them.

I shot the 1972 photo with my manual Pentax 35 mm camera, pushing the black and white film’s ASA to 1600. Last night I used my new little G10 Canon digital point and shoot.

This is a nostalgic weekend. Tomorrow night we’re going to see Crosby, Stills and Nash.

Rock on.
Posted by Gloria Baker Feinstein at 11:52 AM

Gloria, This calls up many memories for me, having spent countless hours listening to Loggins & Messina (and Buffalo Springfield, and Crosby, Stills and Nash) in the Baker basement with the red lightbulbs! I remember when that long-haired handsome guy came on the scene in your life, and the garden wedding at the Temple doesn't seem that long ago! Wonderful photos. Lovely memories. These casinos have been good for something, bringing our favorite old musicians around. Thanks!

how about the waterbed, the blacklight, the endless array of peace signs, the incense? coolest basement ever.

Well, I was leaving some to the imagination! how about the bar and the fridge? In this forum, I cannot tell you how many memories I have of that very cool basement. But, most, of all things, are caught up in the music. Too bad you didn't save the accoutrements Back in style!