Remember the man in the yellow hat? And the naughty, irrepressible little brown monkey and all the mischief he got into?

I do. I must have read those books 4,000 times each to Max when he was a little boy. His favorite was the one where Curious George bakes a cake. George and the man in the yellow hat go over to Jimmy’s mom’s house to help bake cakes. Naturally, George turns the kitchen in to a huge mess when the mom goes upstairs for a little while and leaves him on his own. He makes up for it all, though, and becomes the hero in the end when he bites into the baked cake and finds the necklace Jimmy’s mom had just discovered was missing. Always in and then out of trouble was George. Each and every time, Max thought that was hilarious. 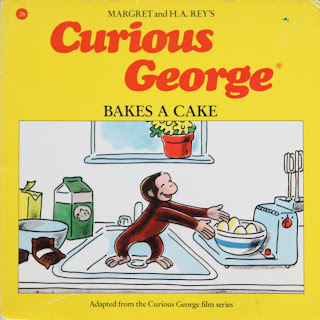 More than three generations of Americans have grown up reading these stories. But few people know about the incredible journey made by George's creators, Margret and H.A. Rey, to escape the Nazi invasion of Paris at the start of World War II. Stashing a few precious belongings and manuscripts in their knapsacks and the baskets of their bicycles, the Jewish couple fled Paris in June 1940, starting a five-month odyssey by bike, train, and boat that would eventually bring them to American shores.

The Midwest Center for Holocaust Education is bringing an exhibition about the Reys to Kansas City this October. The show, entitled “Saving the Little Brown Monkey”, is making its first stop of a five-year tour here. The show explores the Rey’s early creative collaborations and traces how the story of George himself (originally called “The Adventures of Fifi”) spanned the wartime period. The monkey emerged as a character in one of the Rey's pre-World War II stories, and the manuscript that became Curious George was already in progress by 1939. However, wartime constraints on printing as well as the general turmoil of the period prevented the original contract from being fulfilled.

When the Reys were forced to flee Paris along with thousands of other refugees in advance of the German occupation, the manuscript and illustrations for the book were among the few personal possessions they managed to take with them. Escaping via Spain and Portugal, then across the Atlantic to Brazil, the Reys finally reached the United States in October 1940. A month later, they received a new contract from Houghton Mifflin for “The Adventures of Fifi”, later re-titled “The Adventures of Curious George.”

Eddie and I are heading up the docent-training program for the exhibit. If you’re interested in learning more about this opportunity, let me know.
Posted by Gloria Baker Feinstein at 8:02 PM

I love your work. It really is great!