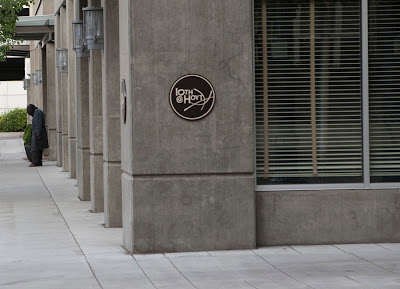 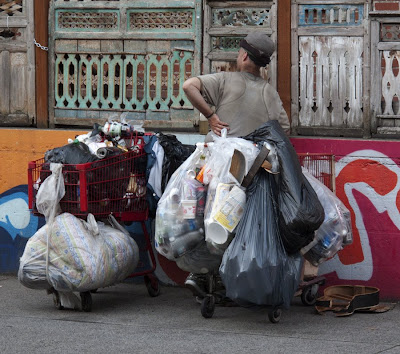 Oregon ranks first in the nation for homelessness per capita, according to a newly released federal report from the Housing and Urban Development agency. On any given night in the state, there are over 17,000 homeless people on the streets. A huge concentration of them can be found in Portland. 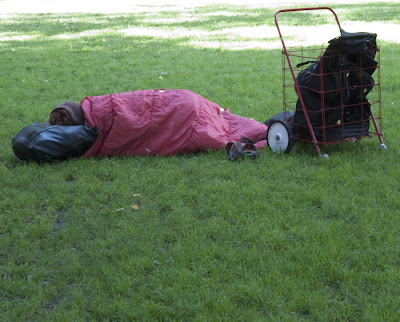 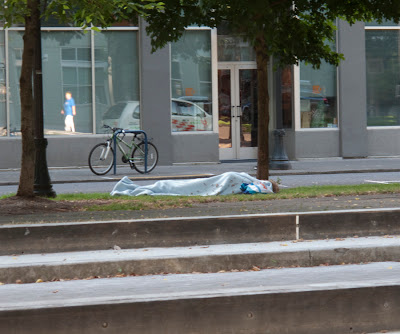 Many are veterans, many are mentally ill. Many are dealing with addiction. Many have suffered from abuse. Some have succumbed to devastating family or environmental tragedies. More and more simply can’t survive the failing economy.

In spite of the furnace that is Portland right now, most wear down parkas or hooded sweatshirts. They sleep in doorways, under bridges, in the parks, on benches, in cars and in abandoned buildings.

The “Portland bum” has a reputation for being loud, aggressive and rude, with a sense of angry entitlement; I’ve actually witnessed that kind of behavior only once.

There are countless services available to the homeless in Portland. Eddie has been volunteering at one of them – Union Gospel Mission – where he helps serves dinner to close to 200 people. He says the “clientele” is polite and grateful.

The community tends to congregate in certain areas of town, primarily downtown and in the parks known as North Park Blocks and South Park Blocks. But there are a few people I see regularly in our area, the Pearl, which is fairly upscale.

There’s one young bearded guy who spends most of his days sleeping in the beautiful little park that I mentioned in my previous post. The park is next to our building, and lots of families hang out there because of the fountain. (It’s also adjacent to a very fancy French restaurant.) This young man hasn’t bathed in awhile, is gaunt and scraggly. His baggy clothes are dirty and torn, his long hair hangs in an unruly fashion and, well, he sticks out like a sore thumb in the sea of young Portland families and groups of friends who come to Jamison Square Park with their picnic blankets and sunscreen. Though these people give the homeless guy his space (no one gets too close) and I doubt that any conversation takes place once he wakes up, it’s interesting to me that they co-exist on some level… at least for a few hours. 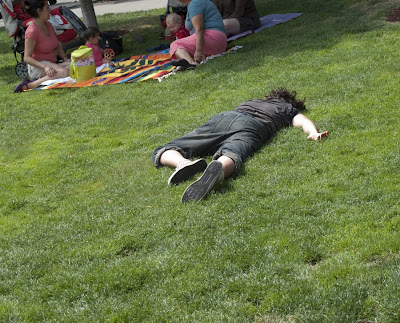 I’ve stopped to speak to several people who live on the streets around here. They have an admirable sense of pride and dignity given their situation. That strikes me as remarkable. They say that Portland is doing everything it can to provide assistance and support to them, and for that they are appreciative.

There are, of course, those who say that the homeless population is plentiful in Portland because so much is given to them: food, clean needles, shelter, health services, etc. You’ve heard the argument before: “If the guy can stand in the sun for eight hours holding a sign, he can surely stand behind the fryer at McDonalds for a good day’s work!” It’s far more complicated that that, clearly, and I don’t know enough about the situation here to really comment. But I do know that an increasing number of people who never imagined themselves in this predicament are there now, and who’s to say it can’t happen to just about any of us?
Posted by Gloria Baker Feinstein at 1:35 PM

Are any of the homeless open to having you photograph their lives? I remember serving food at a homeless shelter and looking up and recognizing someone I knew. I realized at that moment that only my different choices, luck and the support I had in my life separated us and that I could be on the other side of that food line in a blink of an eye. Sobering moment for both of us.

Thanks for illustrating my point so well. That must have been a powerful moment.

I haven't really asked anyone if I could photograph them. You'll notice none of these pictures show any faces. Tonight I went to the soup kitchen to serve dinner, and I struck up a conversation with a couple of really nice guys who I think, if I see them again, might be open to it. I'll see how it goes.