max/ uganda is all kinds of fun 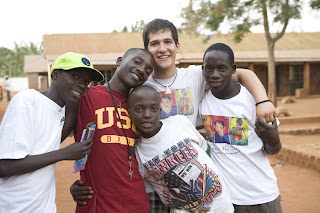 This is a picture of my new Ugandan family :) Like my brother on the left always says when he wants a picture, "take a snap, take a snap!" His name is Habib. Douglas is in the USC band shirt, Nelson ("Big Nels") is in the CTT shirt, and Jacob, my newest drum student, is in the Yankees shirt.

Here’s an excerpt from an email regarding my trip that I sent to a close friend (I also borrowed the title of the email, above). I think it might make for a more interesting read, as it’s more stream-of-consciousness instead of formal writing:

It's really interesting and eye opening to get close with a bunch of kids who have lost either one or both of their parents, and who are extremely poor. Many of the orphans have only one outfit and don't own much else. Some of them seem to be pretty happy, and others are clearly very disturbed. Some of the guys I’ve become friends with, most of whom are close to my age [20-ish], are particularly intelligent and have a great understanding of the kind of education and networking required to be successful. Almost all of them are incredibly kind and warm individuals- like most other Ugandans I’ve met. I've heard Uganda referred to as "the friendliest country in Africa," and I'm pretty certain that's true. It's crazy different from everything we're used to, from the orphanage to the villages to the city.

And on another note, it's really bizarre and somewhat annoying to be among the few non-blacks here. We get a lot of attention from everyone. Many of the street and village kids have only seen a few white people in their lives, and anyone trying to sell anything calls us out, almost to the point of harassment, since they assume that most white travelers have a lot of money. Overall, it's a great experience and a lot of fun. And just as important as the visit to Africa itself, it's great to spend time with my mom.
Posted by Gloria Baker Feinstein at 9:37 AM