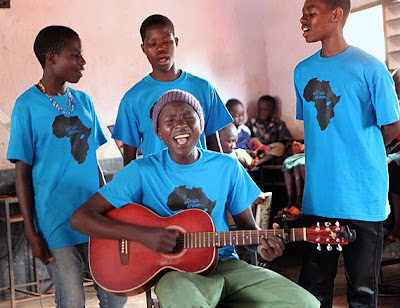 You've often heard me speak about Nicky. He was one of the first orphans I met at SMK in 2006; we established a quick friendship that has continued to blossom over the years. Nicky is one of our sponsored students, and he's a talented artist.

Two years ago at the annual Christmas Day talent show, he blew everyone away with his spot-on Michael Jackson dance moves. Since then, he has added song writing and singing to his repertoire. Monique taught him how to play the guitar when she was at the orphanage this past summer.

He and Team 5 member Shane latched onto one another right away. It was a match made in heaven. Shane provided Nicky with the opportunity to record his music with "Garage Band." Turns out the budding songwriter has eight songs under his belt already! The one the guys worked on with dogged determination and passion is called "Cool Cool Life." It didn't take long for Nicky to understand the elements of laying down tracks, and soon the dynamic duo was busy recording percussion, back-up singers, harmony, etc. "Cool Cool Life" is a really catchy song; I found myself singing the chorus over and over again in my head the first day I heard it. Shane and Nicky did a masterful job of recording it, and I hope you will all have the opportunity to hear it soon. 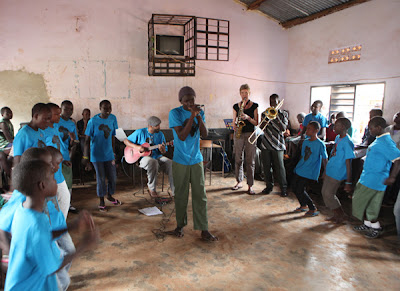 Watching Nicky and Shane work together made my heart soar. Shane simply gave my young friend the tools and the encouragement he needed; once those were in place, there was no stopping the aspiring artist (who, by the way, is often called "Nicky Bieber" around the orphanage). Nicky definitely knew the sound he wanted to achieve. He directed the group of back-up singers/dancers, and he made suggestions to Shane regarding the recording. It was as if he had already done this a thousand times. (I guess in his head, he probably has.)

On our final day at SMK, Nicky got to perform two of his original songs: "Cool Cool Life" and a thank-you song to Team 5. Nicky was in his element, and was he ever happy! His back-up singers (notice all the children were wearing Shane's "Africa Dream" t-shirts... his gift to them) were awesome, and he even had a horn section! Shane, you made this young boy's dreams come true.

I could not have been more proud of both of you.

Move over, Justin B.!
Posted by Gloria Baker Feinstein at 12:56 PM

What a terrific way to end your visit this year! MJ

Way to go Nicky!! Your art inspires everyone who has ever met you. :) Maya