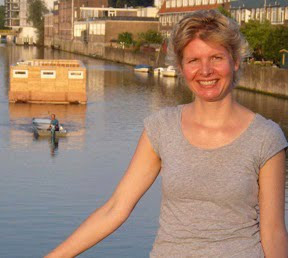 I am looking forward to meeting Monique. She and I have only communicated via email. She spent a month at the orphanage this summer; that was a huge gift for CTT, the children and me. When I got the news that she had chosen to be a member of Team 5 and make her second trip to Uganda, I felt extra lucky! I know her music students at SMK will be so excited to see her again in four short weeks.

Not only has Monique gone to the orphanage and taught music, she is the person who was responsible for the donation of a set of hearing aids for young Moses. She also wrangled a gently used tuba for the marching band, wrapped it in clothes, included some sheet music and shipped it from the Netherlands to Uganda. And yes, after a couple months, it finally arrived! (More on that later.)

It was a good day when Monique discovered Change the Truth on the internet. It was even a better day when she chose to contact me. And it will be the best day when the children see her climb out of the van soon after her arrival at the Entebbe airport in December!

"Less more than one year ago, I discovered Gloria’s blog on the internet. After some e-mailing with Gloria, SMK was where I wanted to go in my summer holidays of 2011.

As a music teacher with a passion for traveling I like to teach around the globe. More so, I like to work with talented kids who don’t have the privileges of wealth, supportive parents etc. Reading Gloria’s blog made me realize SMK surely was a place to go.

I stayed at SMK in July-August this year and it was so great that I simply have to go back to continue what I’ve started. I was blessed with the most devoted saxophone pupils I’ve ever had, a lovely group of young recorder players, a talented guitarist, very interested marching band members and so on.

During my stay, the children embraced the music and the instruments to a point that you could hear music coming from every corner. After four weeks, the children were firmly settled in my heart and it was soon after returning home that I booked my second ticket to Uganda.

As an ‘outsider’ from the Netherlands, I’m looking forward to be a member of Team 5 and to share the joy and power of creativity with these wonderful children."
Posted by Gloria Baker Feinstein at 5:30 PM