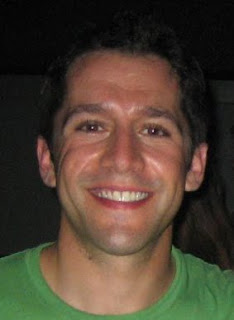 Since this is the time of year to give thanks for our friends and family, I’d like to use this forum to mention how grateful I am for the wonderful family that I have. My husband and children, my dad, siblings, nieces and nephews are all really, really good people.

They’ve been supportive of my work in all its various incarnations over the years. Especially Change the Truth.

Josh is my nephew. He lives in California. He’s a super nice guy who has a super nice identical twin named Andrew. I’ve loved these boys since the moment I first laid eyes on them 32 years ago. They’re sweet, funny, personable, smart, kind, family-oriented - and cute to boot! They’re also huge sports fans.

Every year the boys participate in a giant sized March Madness pool. So colossal that it attracts people from all across the country. Believe me when I say that Josh and Andrew (and their older brother Sam) know sports. They started reading the sports page when they were about two or something. Well, at least drooling on it. I’ve been with them when they’ve made their selections for the much more low key family March Madness pool we sometimes put together. Even then, their picks are extremely well studied and carefully made.

But back to the giant sized March Madness brackets.

Josh actually won it this year!

It was amazing! Kansas had to lose in order for him to win, and I wasn’t too happy about that, but he won! It was so exciting!

The organizer of the pool had stipulated that the winner must donate a certain percentage of the winnings to charity.

Guess who called Josh right away once she heard that little piece of information?

Josh was the good guy I’ve always known him to be, and he said “yes” to me right away. We talked about what he might want to fund at the orphanage; it didn’t take us long to come up with the idea of something sports related.

Football (soccer) is where it’s at with kids in Uganda. They can’t get enough of it. I’ve watched them play in their bare feet (navigating their way around sharp stones and mud). I’ve watched them kick around a ball that has little air, many scrapes and tears and is nearly the color of the rust-orange soil. Last year I noticed that Francis played goalie by putting flip-flops on his hands. Melissa, CTT Social Worker, wrote that “Children in Uganda play football on a recreational level in any dirt laid area large enough to kick a football around and in an organized level through school teams. For the past several years, St. Mary Kevin Orphanage Motherhood has had a school football team competing against other local Primary schools in the surrounding villages during the academic year. Once these exceptional athletes advance to Secondary School, they are often recruited to join their school’s football team. One of the largest challenges has always been adequate football equipment for these players. Most of the orphans at SMK have learned to play football in their bare feet and with substandard equipment.” Here is a picture Melissa sent of one of the SMK kids playing with no shoes during a school match. She wrote that of the ten players on the 2010 school team, only four had football shoes. 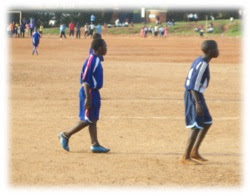 Thanks to my kind and sports savvy nephew, the kids now have: ten pair of football shoes, 14 uniforms (shirt and shorts), a goalie uniform, 15 pairs of football socks, an air pump, three footballs, and two basketballs. And, there was enough money left over to help pay the school fees of one of our sponsored secondary school students.

How cool is that? 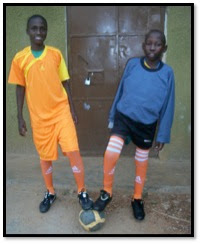 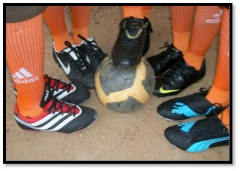 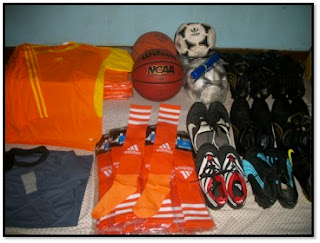 Thank you, Joshua, from the kids at SMK and me. You’ve made Tony, Francis, Kato, Moses and many, many others a very happy crew.

You’re a mensch. And please tell my brother I said so.
Posted by Gloria Baker Feinstein at 3:59 PM