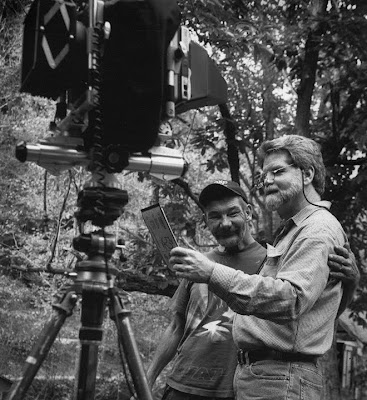 Some of Adams' work has been an inspiration to me. Some of his work has also always made me feel uneasy. As a graduate student at the University of Wisconsin in 1978-79, I traveled back to my home state of Kentucky several times to work on a photo project about Appalachian musicians. The work of Shelby Lee Adams has since hovered in my head and challenged me. While some of it appears honest and heartfelt, often I am struck by how contrived, posed and somewhat slick it can be. The uneasiness i frequently feel has to do with the perpetuation of stereotypes. Beautiful and striking (Adams expertly and admiringly employs a large format camera and lighting), I feel that the portrayals of the poorest, most primitive, unclean and possibly inbred sector of Appalachian society outweighs those of the larger majority of people living in eastern Kentucky.

This bio is from the Catherine Edelman Gallery website:

Shelby Lee Adams was born in Hazard, a small town in eastern Kentucky. Although he grew up in the back seat of his father's car, moving from place to place, he always returned to Hot Spot, living with his grandparents while he attended high school. Living between the worlds of country and town kids, Adams didn’t always feel he fit in, immersing him self in art and photography books and most things affiliated within the visual the arts.

This was the mid 1960s and the Peace Corps and other government agencies had a great interest in the poverty sweeping the people of Appalachia. When the media visited his home town, Adams naturally wanted to help, taking them to meet his grandparents and his uncle so the media could be introduced to the area. When the media described locals as malnourished and poor, his friends and family felt betrayed. This devastated Adams, who felt he had misled the people he so dearly loved -- an experience that had a profound impact on him, leading him to later photograph the people of Appalachia.

It wasn't until he left Kentucky and attended the Cleveland Institute of Art that he understood the lessons he learned from the country people. Finally surrounded by artists, he experienced a complete culture shock, embarrassed by his Appalachian upbringing, telling people he was from Cincinnati. As an art school student for a short time he stayed away from Hazard and his family, searching for a new identity. By his second year in art school, Adams was exposed to the FSA photographers who were sent to the South to document people who were living in hardship. Although initially defensive about the FSA work, Adams submerged himself in documentary books, showing them to his family on a summer visit. His uncle, a county doctor, took him on house calls to meet people similar to the ones in the books. More than thirty five years later, Shelby Lee Adams is still visiting these people, returning year after year, visiting, studying and documenting their lives.

In his new works, Adams introduces us to families who have moved out of the remote mountain hollers into trailers, where satellite dishes dominate the landscape. Whether photographing a father and child surrounded by their cows, a family gathering on a porch during Halloween or an older couple posing with their dog in front of a new satellite dish, Adams's images are compelling, we want to both turn away and stare. That Adams returns to the mountains year after year is a testament to his dedication to work within their challenging environment while expressing their vulnerability, yet maintaining and expressing their dignity. Although he now lives in Massachusetts, Shelby Lee Adams's heart is forever in Appalachia.

He has worked in color, but I prefer the work Adams does in black and white. Here are a just a few of the many, many images he has made in the hollers of eastern Kentucky. 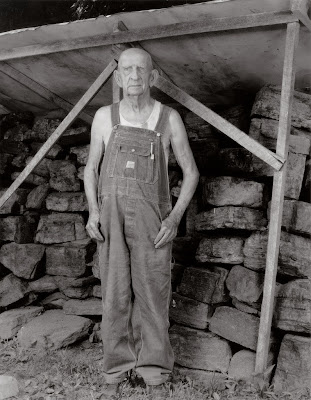 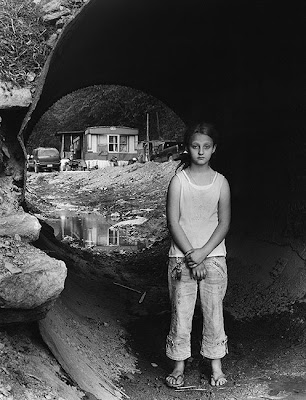 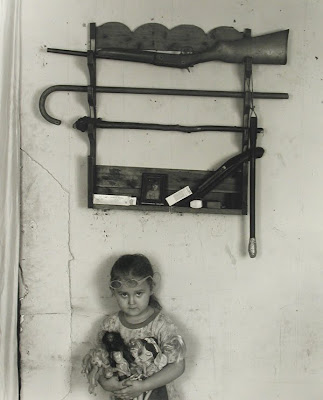 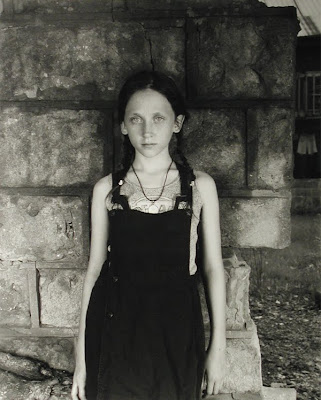 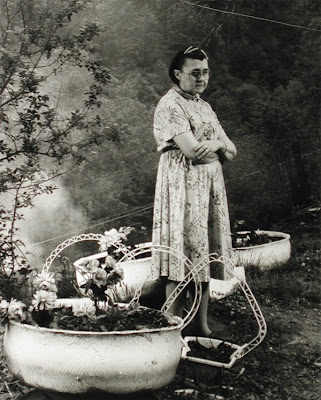 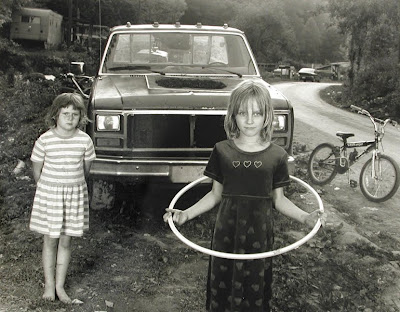 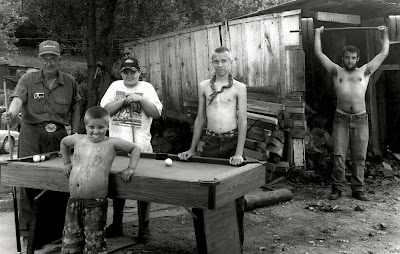 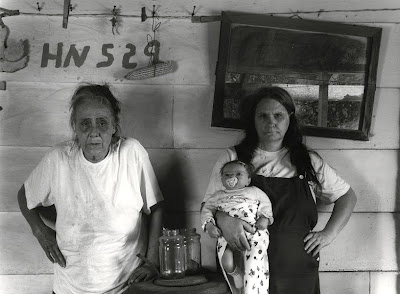 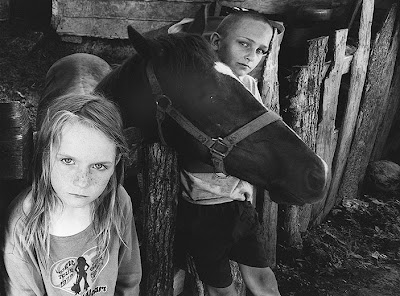 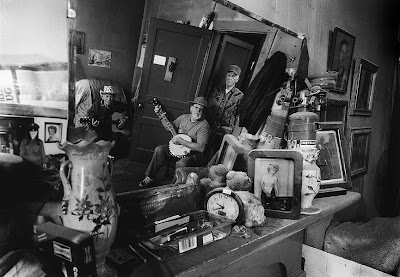 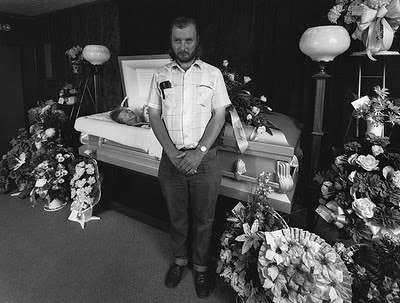 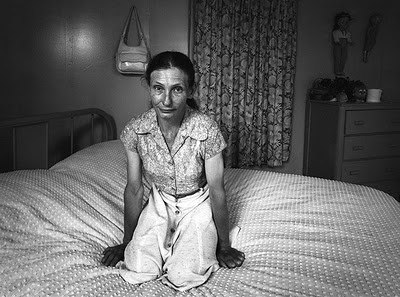 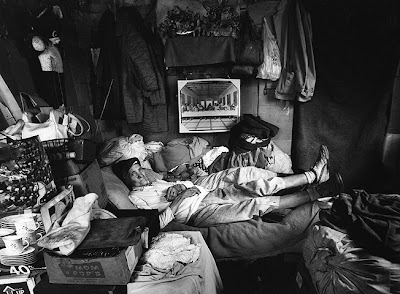 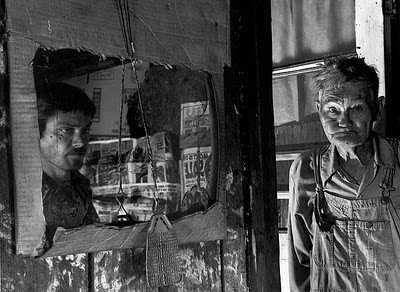 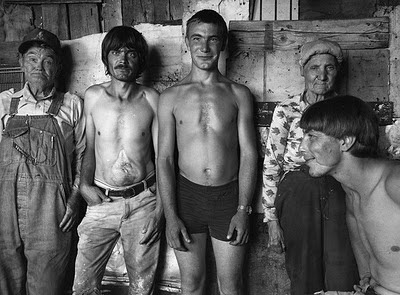 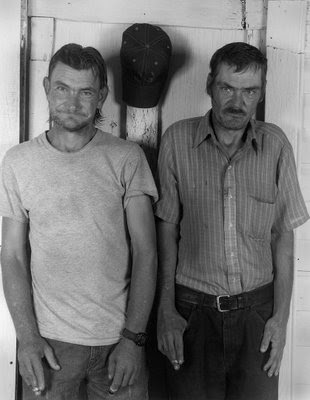 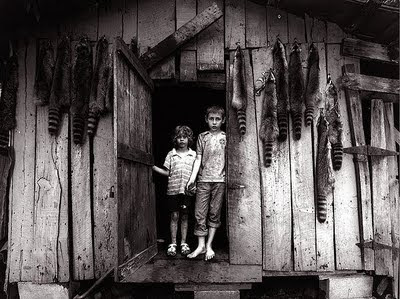 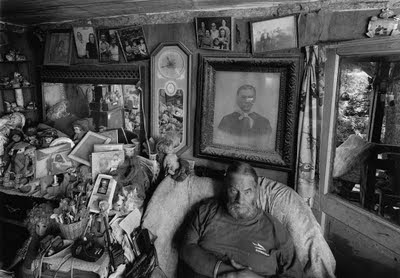 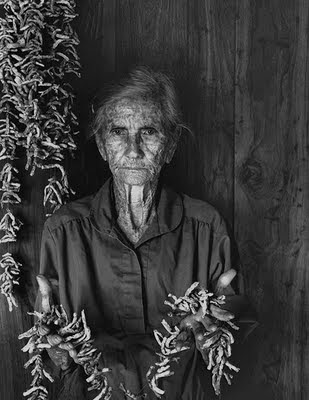 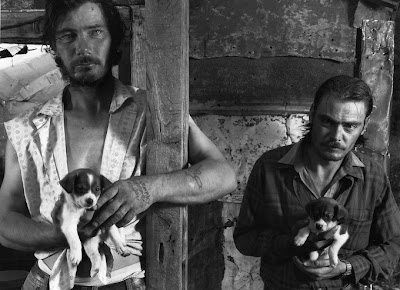 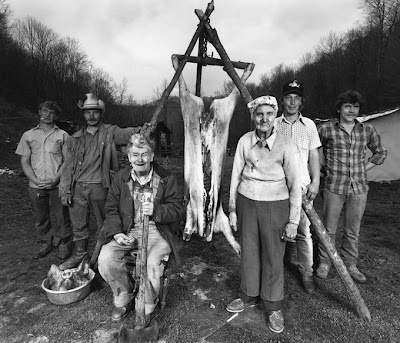 Posted by Gloria Baker Feinstein at 10:04 AM