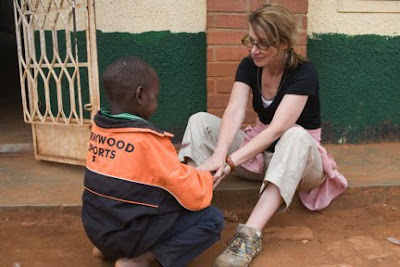 The children at the orphanage will be thrilled when they see that Lynne Melcher is part of Team 5. She is a beloved friend to so many of them. Even though the kids haven't seen her since 2008, they still ask about her and write pen pal letters to her. There's a big "Lynne fan club" in Kajjansi, Uganda!

Lynne has been the magician behind all of the Change the truth films. Her documentaries about the children and their plight have enabled CTT to raise awareness, as well as significant funds. We have been so lucky to have Lynne in our corner. I know we would never have been able to spread the word about the children as effectively as we have these past four years had it not been for Lynne's talent as a filmmaker and her generosity as a human being.

Personally, I am thrilled that Lynne is returning to SMK. I look forward to traveling again with her; she's one of my closest friends!

"Although it’s been several years since my last visit to St. Mary Kevin Orphanage, the children remain a constant presence in my mind and heart. The process of creating documentaries for Change the Truth has kept me connected to them- to their smiles, their stories, their spirit, even when geographically far away. When reviewing footage from my first two trips, or looking at Gloria’s photographs, I often find myself smiling.... just smiling away, which is rare in the labor intensive process of editing. But that’s the effect these children have on me.

The children have also affected the way I think about things.... about life and loss, pain and resilience, struggles and survival. And as a filmmaker, they unknowingly make me want to tell their stories in the most dignified, empowering and compelling way possible.

As I prepare for my third trip to Uganda, I feel honored to once again have the privilege of documenting the children’s lives at St. Mary Kevin, and the efforts of team 5. My goal, as always, is to capture a sense of who these children really are, beyond what we see on the surface, and beyond their circumstances. Ultimately, I hope to educate, inspire and promote change, all of which they have done for me in countless ways."