The first time I ever spoke with my buddy Nicky at St. Mary Kevin Orphanage (in 2006), he told me that both his parents had been killed by Joseph Kony and the Lord's Resistance Army (LRA). 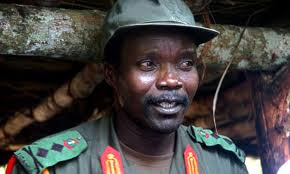 You have probably read in the news that on October 14th President Obama sent 100 military advisors to Uganda to help regional forces track down Kony and his group. The LRA has been wreaking havoc in northern Uganda for 20 years. This action is long overdue.

From the New York Times:

"Joseph Kony is one of the most vilified rebel leaders on the planet. He stands accused of brainwashing countless children across northern Uganda, turning the girls into sex slaves and the boys into prepubescent killers.

His so-called Christian movement, the Lord’s Resistance Army, has terrorized villagers in at least four countries in central Africa for nearly 20 years, killing tens of thousands of people, burning down huts and hacking off lips. The fact that Mr. Kony, whose followers believe he is a prophet, rarely appears in public has only added to his brutal mystique.

Exiled to a fiefdom on the border of southern Sudan and the Congo, Mr. Kony in 2007 emerged from the wilderness indicating a willingness to sign a historic peace deal with the Ugandan government that would disband his army. But in April 2008, he backed out, saying he needed more time to consult Ugandan elders and contemplate the war crimes charges brought by the International Criminal Court in 2005."

There are many children at the orphanage whose parents were killed by Kony's LRA. I can't help but think of them now as the man may finally be brought to justice.

The reaction of "Invisible Children" to this news is worth watching. This organization has, after all, been greatly responsible for getting Kony's name out there and making young people in America aware of the tens of thousands of innocent children in eastern and central Africa whose lives have been horribly and profoundly altered by this maniac.

Watch "Invisible Children" founders express their support for Obama's decision to apprehend Joseph Kony. It's a first step, but a huge victory for the thousands of youths who have been lobbying Washington to take action against the LRA.

Nicky, Cate, Otim Isaac, Geoffrey, Lillian, Rebekka, Issy, Petra and the others: I'm thinking about you as I follow the news reports... thinking about what you have been through because of Kony and how his capture might (hopefully) bring you some sort of closure.

[JUST IN: This AP article presents the perspective of Uganda's president and clarifies the issues surrounding US involvement.]
Posted by Gloria Baker Feinstein at 12:31 AM