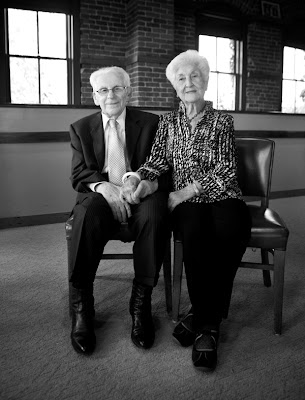 This past week was Ann and Isak Federman’s 65th wedding anniversary. Yesterday and last night was the big celebration. I was privileged to be able to participate, and I was very honored to make their portrait.

Ann and Isak are two of my favorite people - a couple I've long admired, loved and been inspired by.

They are fixtures in the Jewish community in Kansas City. They moved here only months before they married.

“We were on the second ship out of Germany,” Ann recalled in a recent KC Jewish Chronicle article. “We didn’t know what we were doing or where we were going to go, and after we got to New York, they sent us to Kansas City.”

"Ann is from Bendzin, Poland. In 1942 she was sent to a labor camp in Czechoslovakia along with her sisters, Gertrude and Lola. Ann was 20 when she was liberated in 1945.

Isak was born in Wolbrom, Poland. During the war he was imprisoned in 17 different concentration camps, including Bergen-Belsen. Sick and weighing only 80 pounds, Isak left Bergen-Belsen following the liberation.

A Jewish doctor in the British army took Isak under his wing. After spending a couple of months in a British hospital, Isak decided to return to Bergen-Belsen.

Following the war, Ann, Gertrude and their brother, John, also went to the Bergen-Belsen Displaced Persons Camp to search for other family members. (Lola did not survive the Holocaust. Both of Ann’s parents died shortly before the Holocaust.) Isak and John had met during the Holocaust, and found each other again at the DP camp. It was through John that Isak met his beloved Ann.

It was Isak’s idea to come to the United States. Isak, Ann and their traveling party — totaling 10 people — were on the ship for almost two weeks. An American Jewish social service organization welcomed them when they arrived in New York. They were taken to a hotel and told they were going to Kansas City because it was a nice place.

They came to Kansas City with each other. Other than that they had nothing.

Soon after they arrived, Isak became friendly with Rabbi Tibor Stern. Within a couple of months, the rabbi suggested to Isak that it was time to marry Ann.

As Ann recalls, it was the rabbi who actually proposed to her.

“He called me and asked me when is a good time to get married. I said anytime. So we did,” Ann said. 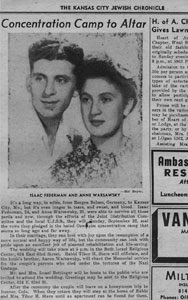 Because they were set to be the first Holocaust survivors to marry in Kansas City, the entire Jewish community was invited to the wedding. More than 500 people attended the ceremony on Sept. 22, 1946, three months after they arrived here. Ann was 21 years old; Isak was 24.

The ceremony itself wasn’t as joyous as the couple had hoped. In fact, Ann doesn’t even like looking at her wedding photo, because she remembers people crying tears of sadness at the wedding. That’s because Rabbi Stern chose to focus his speech on the horrors of the Holocaust, not the happiness of the day or the happy times that would be ahead for the couple.

“The rabbi gave a eulogy at our wedding,” Ann said.

Their past was indeed horrendous. All of Isak’s immediate family — two sisters, one brother, his mother and his stepfather — perished in the Holocaust. Several members of Ann’s family did survive the Holocaust and eventually two brothers and a sister — John (whose wife, Sonia, still lives and works in Kansas City), Aron and Gertrude moved to Kansas City. All of Ann’s siblings are now deceased.

Together Ann and Isak had three children and five grandchildren. A year ago their great-granddaughter was born.

The Federmans built a wonderful life for themselves. Isak was a successful businessman and Ann an amazing mother. Both have always been active in community service. Isak and his friend Jack Mandlebaum founded the Midwest Center for Holocaust Education.

My family and I have celebrated countless Jewish holidays with the Federmans over the years. My children have had the benefit of "surrogate grandparents" in them. We've built sukkahs together, sung songs at Passover together, shared challah on Shabbat together and enjoyed Bar and Bat Mitzvahs and weddings together. Their family has been such an anchor for ours.

To say that Ann and Isak are special, amazing, kind, loving, inspiring, beautiful people is simply an understatement.

Happy Anniversary you two. I love that you still always hold hands.

(In this post I have used a lot of information and several quotes from the Jewish Chronicle article, which was written by editor Barbara Bayer.)
Posted by Gloria Baker Feinstein at 9:26 AM