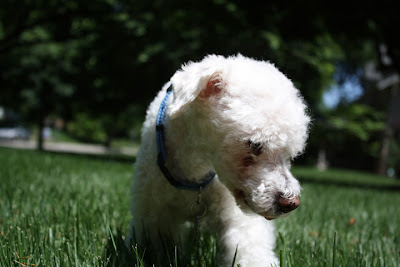 I think Sam must have heard us. Or at least sensed the vibe. (Since he can hardly hear, the latter is more probable.)

A few weeks ago, Eddie and I were having a certain conversation about our dog that we could never have about a human family member. You know, the one that includes words like "put" and "down".

Sam was bumping into chairs and tables, cabinets and door jambs. He tumbled off the bed a couple times and even fell down a flight of stairs. He couldn't hear us when we called him. He had trouble walking. He was having a lot of accidents in the house. He was, well, acting his age. In August, he will be 17.

We had decided not to take him to the groomer anymore. That experience was getting to be pure torture for him, and we have been trying to make his golden years as comfortable as possible. But with the heat of summer bearing down, we finally gave him a Xanax and subjected him to the scissors. His long lock and curls were replaced with a crew cut. 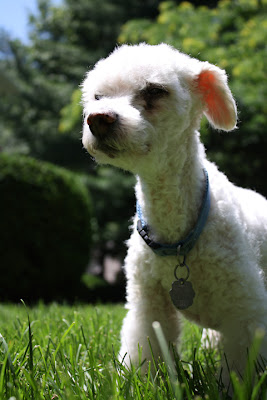 Maybe we started treating him differently? I don't know, but suddenly he didn't bump into stuff as much (had it been the hair hanging down over his eyes?) He started to seem a little more perky.

A few weeks later, and I swear... he actually has a little spring in his step! We took him to the vet for a check-up and were told that his heart is strong, his kidney and liver are functioning well, and in spite of the fact that his vision and hearing are severely impaired, he has some muscle atrophy in his hind legs and there are a couple skin tumors on his haunches, he was pronounced "engaged and curious" just like a youthful dog would be.

They say Bichons believe they are cats. Maybe the nine lives thing is part of the gig?

Whatever the case may be, Sam has sort of sprung back to life. He still sleeps through most of the day and has stiff legs when we wake him for his walks, but when he is up and around, he seems to be telling us, "hey, I'm not so sure I liked that conversation you were having about me a few weeks ago."

More power to you, Sam-dog. We are listening. And we are amazed and in awe of you.

[These beautiful photos were taken by Max, who happened to be in Kansas City when the crew cut occurred.]
Posted by Gloria Baker Feinstein at 9:42 PM