a picture can be worth lots of words 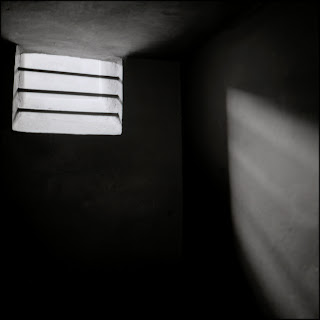 There is a blog called Every Photo Tells a Story. Each day a new image is posted, and readers are encouraged to write something based on that visual prompt. The creator of the blog writes, “If you want inspiration to write or create, or if you enjoy beautiful photography and art, then you've found the right place!” She contacted me recently to get permission to use one of my photographs as a tool to inspire her readers/writers. I was really moved by the poems submitted. The image she chose was “Solitary Confinement Room, Auschwitz” a picture from my series, “Among the Ashes.” Here are three poems written by her readers.

A vile and bitter darkness
Dwells within these walls.
A vestige of past evils
That shocks us and appalls.

Auschwitz now stands silent,
Its cells like empty wombs.
The ghost of horror and despair
And shame it now entombs

Cries of utter hopelessness,
Born of mortal fears
Arose to a crescendo,
But fell on deafened ears

A blinded world stood idly by,
Midst the suffering and pain
A haunting question taunts us now,
Is it happening again?

You've been out there?
You've seen out there?
You've smelled the waste? The fear?
Racks of bones are made to toil,
Digging roots from frozen soil.
Sleepless nights in louse-filled bunks.
Scraps of food in cold grey lumps.
Endless coughing through the night.
Every sound is cause for fright.
They think that it's a punishment in here...
Posted by Gloria Baker Feinstein at 1:57 PM

Labels: Among the Ashes, Every Photo Tells A Story, photography

Every Photo Tells A Story said...

Thank you so much, Gloria, for writing about my blog, and for allowing me to post your amazing photograph. Amazing not just because of the subject matter, but because of the difficult journey you had to take in order to shoot these pictures. And, as we all should know by now, each of these images have millions of tragic stories behind them.

But Jesus said, "I tell you, Peter, the rooster will not crow today until you deny three times that you know me." International Standard Version (©2008)