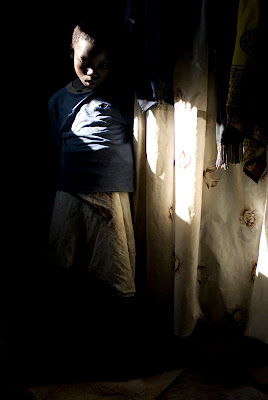 No, this is not a picture of mine, though I wish it were! This photograph of a little girl named Rosemary was made by my friend Anna Boyiazis, who I met on my first trip to Uganda. We were fellow students in the NGO photography workshop taught by Thatcher Cook. During that workshop, each of us spent a few days with our “own” family in a small village in the Rakai district, documenting lives in a part of the world that has been devastated by HIV/AIDS. (Rakai actually has the unfortunate distinction of being known as the “birthplace” of AIDS.)

Anna recently returned to Rakai and spent two months immersing herself in the life of the village. Her photographs and her stories about the experience are amazing. She sent me this email upon her reentry to the U.S.:

When I was in Rakai, I was introduced to two little children, Rosemary + Vincent. Their dad died of AIDS; their mom cut. The kiddoes were taking care of their ill grandmother. Nobody was taking care of them. They were sleeping on shreds of torn clothes and were lucky to get a meal once every couple days.

I suggested the children be placed in an orphanage and suggested St Mary Kevin’s. The village spent more than a month warming up to the idea.

My biggest desire is to make this the least traumatic that it can be for these children. They have already been through so much in their short lives; I can only imagine what it would be like to be taken from their home and grandmother. The grandmother has an ideal situation (from her perspective) -- she has two little ones to fetch her water and tend the gardens. I had to explain repeatedly that these children deserve consistent meals and an education... that the current situation was not in the best interest of the children, but of the grandmother. The challenge was convincing the village that THEY should care for the grandmother.

Francis, the children's next-door neighbor, is willing to transport the children to the orphanage. He is in his mid-twenties and is torn up about the situation. He wants to open an orphanage in Rakai. I have encouraged him to get to know Rosemary... that perhaps she could end up being a powerful mentor for the young lad. He has a degree in social work and cannot find a job. He loves these children and is totally trustworthy.

I will not feel at peace until these children are in Mama Rosemary's loving hands. One of my friends in California has offered to provide funds for the transport of these children to the orphanage.

Anna was actually able to send someone she knew was in Kampala to make the trek to SMK and was able to then make contact with Mama Rosemary on the phone; she has agreed to take the children in. Anna and I are now working on the logistics of making it happen.

I’ll be sure to update this story here on the blog. It’s a story that will hopefully have a happy ending. Kudos to Anna for bringing it this far! Perhaps on my next visit to SMK, I'll be able to put my arms around little Rosemary and Vincent, and will see first hand how their lives have changed for the better.

Anna is just one person, but she making a very big difference.
Posted by Gloria Baker Feinstein at 10:48 AM