When I opened my gallery in 1981, there wasn’t a lot of photography action going on in Kansas City and its environs. Collectors here were just beginning to understand the important historical significance of vintage work and the excitement of discovering contemporary images by emerging and mid-career photographers. Hallmark had been actively assembling its major photo collection since the 60’s, but that work was only occasionally seen by the public. Hard core fans had to travel to Chicago, New York or LA if they wanted to see the good stuff on a regular basis.

My place, the Baker Gallery, helped fill in the gaps as much as a small art gallery could do in those early days. Over the years, though, more and galleries began to show photography, and museums ramped up their photo show schedules. The Society for Contemporary Photography (now defunct) was born in a Kansas City collector’s basement in the late-80’s and went on to become a nationally recognized organization. The Kansas City Art Institute continued to build its strong photography program, and more and more talented graduates began renting studio and loft spaces in the area, contributing to a plethora of fascinating exhibitions. Kansas City was truly ready for what took place in 2006 when The Nelson-Atkins Museum of Art acquired the Hallmark Photographic Collection. The collection spans the entire history of photography, from the birth of the medium in 1839 to the present. At the time of its acquisition, it included more than 6,500 works by 900 artists, with superb examples by virtually all the key American photographers in history. The collection is housed in the Bloch Building, which triumphantly opened in 2007 to resounding applause from the architectural community worldwide. With the acquisition and the move into this spectacular building, the Nelson-Atkins took its place as one of the premier museums in the world for photography. A great coup for Kansas City and its photography lovers!

I have been privileged to witness and be part of the exciting growth of, acceptance of and enthusiasm for the medium in this great Midwestern city. We’ve definitely come a long way. This past Thursday night, I joined other photo enthusiasts in a packed auditorium at the Nelson-Atkins Museum's Bloch Building to hear a conversation between April Watson (associate curator) and the wildly popular photographer Gregory Crewdson. The Crewdson presentation was made possible by the museum’s Photo Society. I looked around and saw people I’ve known for a long time, people who used to park themselves in chairs at my gallery on Saturday afternoons to talk about photography, to browse through books, to explore the flat files and to hang out with other photo-lovers.

Thursday night I found myself marveling at how our patience and persistence has paid off; we now have the world famous Bloch Building with its world famous collection and its world class curatorial staff right here in our own back yard! Between Keith F. Davis, April Watson and Jane Aspinwall, the collection could not be in better hands.

(Just so you know how full circle this whole thing is for me, I am posting this photo of my daughter Abbie. 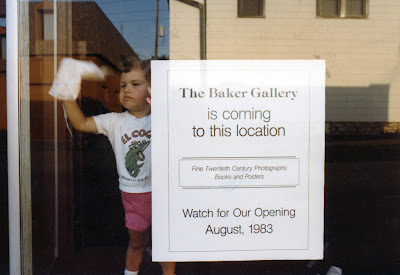 She was three years old and was hard at work helping me get the Baker Gallery spruced up for the grand opening of its new location on State Line Road back in 1983. And that wildly popular photographer who spoke Thursday night and then came to my home for a reception in his honor? Abbie’s advisor/professor when she obtained her photo degree from Yale in 2003.)

If you live in the Kansas City area, get ye to the museum. If you don’t, plan a trip to do just that.
Posted by Gloria Baker Feinstein at 1:21 PM

Thanks Gloria! It's important, as you say to connect that history, and you do it so eloquently.