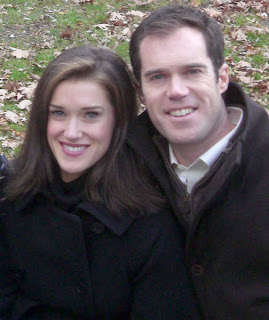 You’ve probably seen this good-looking guy, Peter Alexander, on NBC news. He and his family are dear friends of my brother’s family. Peter and my nephew are life-long best buddies; I remember a 13 year old Peter wowing everyone on the dance floor at my nephew Sam’s Bar Mitzvah! He had a magnetic personality (and great moves) very early on.

Peter has a sister named Becky. She has suffered for many years with a gradual diminishment of her ability to see and hear. She was first diagnosed, at age 12, with retinitis pigmentosa, an inherited disorder where the cells in the retinas slowly degenerate. She was told she would eventually lose her eyesight. Then her hearing started to decline; by high school she got her first hearing aids. In college she was diagnosed with Usher Syndrome, type III, a disease that affects about 16,000 people in the U.S. It causes its victims to go both blind and deaf. This will likely be the case for her in the next ten years.

Becky (she goes by Rebecca now) is truly an amazing young woman.

Peter is doing a story on the NBC News Today Show about Rebecca on Friday. It is supposed to air between 8:00 a.m. and 8:15 a.m., though the time (and even the date) could change if it turns out to be a big news day.

The story is about Rebecca's courage facing her disabilities while living in New York City. The piece was inspired by the article that New York Magazine did on her in February. In the story, Peter will be interviewing his sister. Afterwards, the two siblings will be live on the Today Show set and will be interviewed by one of the program's anchors. Rebecca’s story originally piqued the curiosity of Today Show anchor Matt Lauer when he read the New York Magazine article.

If you want to truly be inspired, I suggest you watch the Today show on Friday morning or check out the website later in the day.
Posted by Gloria Baker Feinstein at 7:14 PM

I have read the article about Becky and I was inspired by her ability to handle Usher Syndrome in the Big Apple. I have Usher Syndrome II and I too used to worked and lived in NYC years ago during the 80's. Now at 51, the toll of Ushers has taken me down a bit, but I still keep on moving forward. What really sucks about Ushers Syndrome II is that you are half way in your lost of vision and hearing, and then it get worst as years pass by. Looking forward to watching the news special on NBC.