I'm putting in long hours preparing for PhotoNOLA, the portfolio review I'll be attending in New Orleans beginning later this week. I'll be showing both the Uganda and Kentucky work, as well as my Grandma book (looking for a publisher!) and will attend a couple workshops and lectures. I'm looking forward to showing my brand new work, all of which I am just now printing for the first time. I'm also eager to meet the other photographers who'll be converging on The Big Easy for three days of nothing but photography. We'll all be sharing our work with the public during a "PhotoWalk"at the Ogden Museum from 6 - 9 PM on Friday night. If you're in the area, please come say hello.

I met some really good people on this most recent trip to eastern Kentucky and am appreciative of their willingness to be part of my project. In particular, I'd like to give shout-outs to the Perkins and Cole families. I'd also like to thank Vickie Ducette and Tonya Caudill for taking time to show me around.

Here is my second batch of new images from Appalachia.


On this trip I went to Inez, Kentucky. I wanted to see the house where Lyndon Johnson had crouched on the front stoop to discuss the lack of jobs in Martin County with the home-owner, Tom Fletcher. It was fifty years ago, and Johnson was generating support for his proposed War on Poverty. At that time 60% of the population in Inez lived below the poverty line. Johnson was helicoptered into the small mining town for some good photo ops; this image became an iconic picture of the War on Poverty. 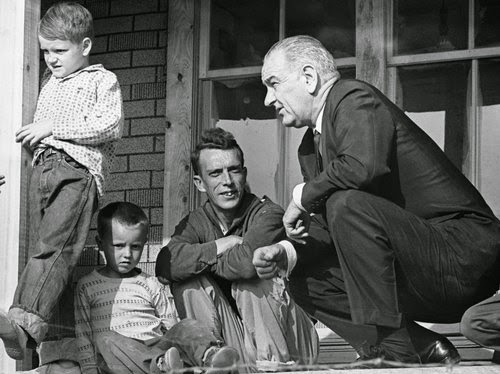 The Fletcher cabin is still standing, and I did get to see it. There's a metal fence with a "no trespassing" sign posted. It looked abandoned, but there are plenty of Fletchers still living in Inez (Tom and his wife had eight kids). The roads in Inez are now well-paved, there are some new, bigger homes similar to those seen in any town in America. The people to whom I spoke said the schools and hospitals are much  better than they used to be. Still, however, Martin County is one of the poorest counties in the country, with a poverty rate of 35% (more than twice the national average). Jobs are very hard to find, and only 9% of the adults living there have a college degree.

There's a nice, new community center in the middle of town. That's where I found these young men. They had been playing basketball. Turns out they'd never heard of Lyndon Johnson or the War on Poverty, but they said life in Inez is pretty good for them.

The stats in Inez aren't much different from the other counties I've been visiting in eastern Kentucky. The poverty levels are highest in the areas tucked away in the hillsides - in the "hollers". Here the unemployment rates are very high, few people attend college and there's an incredibly high percentage of people collecting disability. A substantial number of people smoke and consume unhealthy food and soda, and there are enormous problems with drug and alcohol abuse/addiction.

The War on Poverty has helped improved lives, that's for sure. Some of the people in Inez, though, say it was just a skirmish, and that there needs to be another declaration made - the sooner the better.

Posted by Gloria Baker Feinstein at 8:59 AM

Labels: photography, PhotoNOLA, War on Poverty, You Are Kindly Welcome