During this next week, we Americans will gather with friends and family to give thanks for all the good things in our lives. Especially food. Which I, for one, always seem to take for granted.

In round numbers there are 7 billion people in the world. 925 million of us are "undernourished" - that's "hungry" to you and me. One in seven of us. Nearly all of this hunger occurs in developing nations.

Don't worry... this is not going to be a guilt ridden essay about how much food we'll likely consume on Thursday. It's actually a post with some very good news!!!

Let me begin by reminding you that the food situation in Uganda has done nothing but deteriorate since I first went to the orphanage in 2006. That's because the price of beans, rice, sugar, maize and other staples have continued to increase - and have even skyrocketed during the past couple years.

The scenario at the orphanage has gotten so bad that feeding children during the long school holiday breaks has become very difficult. For the past year or so, SMK administration has had to send all children "home" to their guardians because there simply haven't been enough funds to buy and prepare food during those long stretches of vacation. There are some children who have nowhere to go; they, of course, stay, and the necessary provisions are made.

CTT sends SMK a monthly stipend for food. We absolutely do what we can to help, but the need keeps getting greater and greater.

Now, the good news! Because of the generosity of an anonymous donor, a large plot of land at SMK is now being turned into a garden - chock full of heathy fruits and vegetables - that will become a sustainable and long lasting source of food.

We're hoping this will alleviate the problem somewhat. This, in tandem with accepting fewer new orphans into the program and finding more sponsors for those who are there, should make things better.

The garden, which will be dedicated when Team 6 arrives in December, will be called "Tom and Randy's Garden" in honor of two beloved CTT friends who were part of Team 2 in 2008.

The garden was actually born a couple months ago. First, a huge brick wall had to be built around the edge of the land. Seeds were then purchased, and the land was tilled. A part-time gardener was hired, and the planting has now begun! The east African sun and rain will do its thing. Weeding and harvesting will be done by the gardener, with the help of some of the older children. 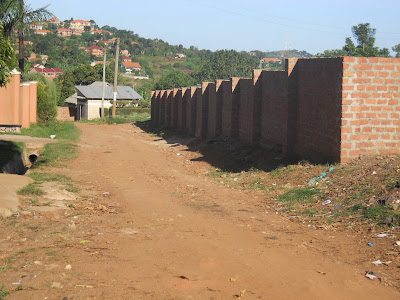 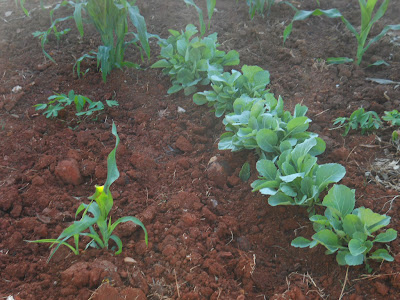 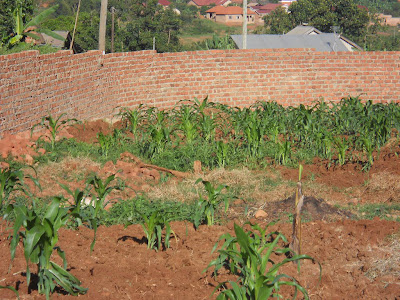 Thanksgiving indeed!! CTT is grateful to the donor who made this endeavor possible and to Tom and Randy for all they mean to the children - who still think of them and miss them four years after having first met them.

[Thanks to Melissa for the pictures of the sweet new garden.]

This is wonderful, truly wonderful.
- A.S.