a whole lot of magic back then

“I only came in contact twice with Michael Jackson, who died today at age 50. Both times occurred 25 years ago in Kansas City, where he and his brothers launched the 55-concert Victory Tour, the Jacksons’ final tour of the U.S. and Canada.

I had been sent to Kansas City by a San Diego newspaper to cover the sold-out opening performance, which turned out to be a rather muddled and effects-driven event that attracted 45,000 fans to Arrowhead Stadium. 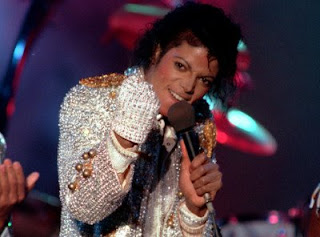 The concert wasn’t particularly memorable. But what happened earlier that day was unforgettable.

After a ceremony at which Michael and his brother Tito accepted an award, several young female fans sneaked into the drab and nearly empty conference room.

To them, however, it was an extraordinary place, a hallowed site where the Gloved One, also their loved one, had recently been. They walked giddily around the interior of the room, touching the walls lightly with their fingertips as if they were in a palace adorned with gold and jewels, or perhaps a sacred shrine.

‘Michael was here - I can’t believe it. Michael was really here,’ said one of the teenagers. ‘Michael’s the greatest, the absolute greatest.’

At that point, before his personal life got seriously creepy, his looks became truly freaky and his career tanked, Michael Jackson was more than the Elvis of the ’80s. He was the King of Pop, the exalted singer-dancer-songwriter who was revered for his landmark album ‘Thriller’ and was instantly recognizable around the globe.

I had never encountered that kind of adulation before. Not with classical music or opera stars like Leonard Bernstein or Placido Domingo. Not even Luciano Pavarotti, the King of the High C’s, had such fame.

That afternoon in Kansas City taught me about the power of pop culture and the emotional connection between a superstar and his or her fans. Though you can dismiss what those young girls felt as a case of immature infatuation, it was meaningful and real to them and to millions of others who felt the same way.

So say what you will about him. Love him or loathe him. Respect him or reject him.

The truth remains: Michael Jackson once had the magic.”

Eddie and I were among the throng of 45,000 at that Arrowhead Stadium concert back in 1984. We, unlike Valerie, thought it was a pretty amazing performance. Of course, we grew up on the Jackson 5 and all those magical things that were mid-career Michael.

Tonight we're on our way to see Stevie Wonder, who apparently was so shaken yesterday by the news of Jackson's death that he couldn't speak. Rumor has it that he's going to do a special tribute to his friend tonight.
Posted by Gloria Baker Feinstein at 6:02 PM