Several people who have young children asked me if they could bring them to our fundraiser and, more specifically, if the movie would be appropriate for them to watch. Parents do what they have to do – some protect for a good long time, while others let their children go ahead and learn about the real world. 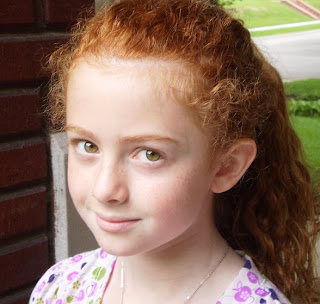 My neighbors and friends, Jane and Josh, brought their ten-year old daughter. Jane told me that Leah has been reading about the Holocaust already. In fact she reads everything she can get her hands on and even recently watched “Schindler’s List.” She has a big heart and a knack for understanding other people’s pain. She’s only ten, I keep reminding myself.

We had a sign-up sheet for people who would like more information about going to Uganda with the next Change the Truth Team. Guess whose name I found about half way down the list? Yep. You guessed it: Leah.

I called her yesterday and asked her to write a few words about the Friendraiser/Fundraiser. About an hour later, I got this incredible composition. Neither of her parents were at home, so I know this came strictly from the heart, soul and hand of Leah:

“Gloria has done something good-hearted. She has given children something to make them feel like children. These children now feel loved, nurtured, even pretty happy. The children in Uganda die from sickness, poor living-conditions, and war. Gloria has gone to Uganda with a group of people and helped those children. She gave them music, sanitation, love, art, comfort, blissfulness, and much more. Gloria and her group want to spread what they’re doing, so Gloria wrote a book with some help. Someone made a movie, and Gloria took pictures. First I’m going to share what I thought about the movie.

The movie basically reached into your heart and pulled out everything stored inside. Everywhere around me were people. In all those people’s hearts were understanding and compassion. In all those people’s eyes were tears. On the screen were so many kids who were dirty and undernourished, who had been traumatized when they were young. They stored their memories in and then on the screen their stories poured out with words, drawings, and tears. So many tears. But today they are almost all the way stitched up and on their way to recovery. Now, less people are dying from disease and more people are happy. Now I’ll tell you something about the book.

In the book are Gloria’s amazing pictures, drawings the children made, quotes the children wrote, and dreams the children had. All the photographs were of these children. One really reached out to me. There were lots of children, reaching out for something. I think they are reaching out for food. I loved this picture so much, my mother bought it with the special-edition book. One of my favorite drawings is one of roses, probably drawn in pastel or crayon.

The book and the movie moved me so much, that I would like to go to Uganda. There is a twelve-year-old doing it, so can’t a ten-year-old? I think anyone can. Anyone can do something good. Everyone should do something good. And Gloria and so many others have.

Leah”
Posted by Gloria Baker Feinstein at 8:14 AM

Not only is 10 year old Leah amazing, compassionate and inspiring but she expresses herself so well!

It was good work ,thank you so much for the wonderful work you plus CCT you are doing for the children of Africa.
peter
Uganda

This girl is already a talented writer and she herself can tug at a reader's heartstrings. This made my day. I am so proud of this girl and I have never even met her.