This is Claire. This is the smile that would greet us each morning when we arrived at St. Mary Kevin, and it is the smile that lasted for most of the day. It’s one of those smiles that beams its way into your head and heart so that, even if Claire is off doing something else and isn’t in your line of sight, you refer back to it for inspiration. Of course, by our standards, she doesn’t have a whole lot to smile about. That’s where the inspiration part comes into play – at least for me it does. Kids like Claire help keep me going when I start to have difficulty keeping it together, whether I’m in Uganda or the USA. 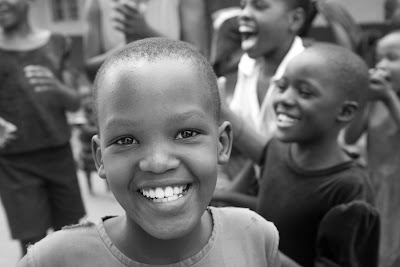 Kids like Claire are the reason so many of us have dug in our heels and spent many, many hours preparing for tonight’s friendraiser/fundraiser (6 – 9 PM at the Screenland Theatre, Kansas City.) The money that we’ll raise tonight by selling drawings, dolls, dinner plates, dyed fabrics and jewelry made by Claire and the other orphans, will help insure that food, education and medical care are things she doesn’t have to worry about day in and day out. She can focus her attention on her schoolwork, her friends, her jump rope, and the hope she feels in her heart for a better future.

The first time I trudged onto the grounds of St. Mary Kevin, I was a jet lagged traveler who was simply overwhelmed, astonished and saddened by the situation in which the orphans lived. They were segregated on one side of the school grounds; the children with parents had the privilege of living on the other side. The two sides were like night and day. Even though both were tired, dirty and shockingly sad, the orphans’ “neighborhood” was distinctly worse. The children sat together, isolated from the non-orphans, on a dirt path in front of the small dormitory to eat their food. They were the second-class citizens.

All of that has changed now. The orphans have been integrated into the school population at SMK; they join the others at tables (though many still prefer to sit on the floor) to eat their meals, they wear nicer clothes, they have opportunities for education, they smile.

In fact, Rosemary has told me that now the orphans are envied by the others. They are no longer the dirty street kids who had nothing and were nothing; they have been so boosted up by Change the Truth that the non-orphans wish they were getting such royal treatment!

The first time I met my little friend, Nicholas, he could not speak English very well. He was painfully shy and mostly kept his head down. He tried, in very rudimentary English, to tell me the story about how his parents were killed by rebels in a war in the northern part of Uganda, his home. He couldn’t get past the part about his mother being dragged out of their home by soldiers. So we just kind of sat together crying for a while.

Now Nicholas (who announced to me during an art class this past December that he would now be signing his drawings “Nicky” and would I please call him that?) is taller and much more confident. His English is wonderful. He has blossomed in art and in music. Nicky’s smile, like Claire’s, will get you through the roughest day life might throw your way. Nicky is a great student; he works hard because he wants to be a doctor someday, and he knows the school fees will be there for him. His heart is as big as a heart can possibly be. He is one of the most respected and well-liked kids at SMK. He’s come a long way from the day I first spotted him sitting in the dirt eating his porridge in front of his shabby dorm, ostracized because he was an orphan. People look up to Opio Nicholas, not down.

Change the Truth has been hugely instrumental in making these changes happen.

Tonight is our shot at raising money so that we can continue to ensure that Claire, Nicky and all the others who have taught us so much – mainly about possibilities and hope - can keep on smiling.

Please join us.
Posted by Gloria Baker Feinstein at 8:15 AM

Gloria - We will be praying you have a very successful night tonight. We are in this together to provide a better hope for the children at SMK. We were so glad to spend a little time with Melissa during her recent visit here. Look forward to hearing the success of your fundraiser and working together in the future.