The number of constellations in the sky as defined by the International Astronomical Union is eight-eight.

Eighty-eight (88) symbolizes fortune and good luck since the word 8 sounds similar to the word Fā (发, which implies 发财, or wealth, in Mandarin). The number 8 is considered to be the luckiest number of all in Chinese culture.

Tony Gonzalez, by far the sexiest football player ever, wears #88 for the Kansas City Chiefs.

The model number of a car my father has purchased many times over the years is the Oldsmobile 88.

There is actually a town in my dad’s home state called Eighty Eight, Kentucky. The town's biggest claim to fame was the celebration of August 8, 1988 (08/08/88).

Eight-eight is approximately the number of days it takes Mercury to complete its orbit. 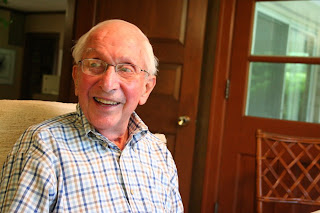 88 to my dad on his 88th birthday today!
Posted by Gloria Baker Feinstein at 7:56 AM

Happy Birthday, Harold, and may you enjoy many, many more! With much love.