max at the oscars 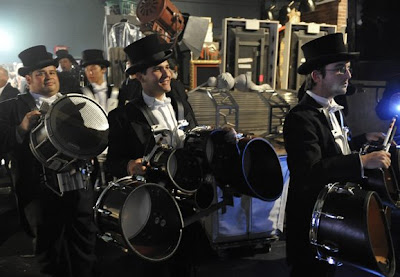 "Did you see me on the Oscars? What, you didn't? Well, no surprise there - I don't think anyone did, except an Associated Press photographer behind stage (picture above). While we knew the performance wouldn't stack up to the band's show on the Grammy's a couple weeks ago, we didn't expect the producer to place us behind a stage prop for the song. Nor did we expect instructions to 'play softly, so that the audience hears the recorded track, not you.' Nevertheless, I had the privilege of enjoying the Oscar's from an exclusive on-stage perspective. Although the Academy didn't bother to mention the USC band, it was an honor to be part of the group asked to play on the Oscars. It was an incredible production to witness firsthand. I'm thrilled to have been a part of it, and I hope that I'll be more visible next time I show up on TV :)"
Posted by Gloria Baker Feinstein at 6:14 AM

That must have been an amazing experience, one not many of us will ever have. I hope you got some autographs, or better yet, that someone asked for yours!