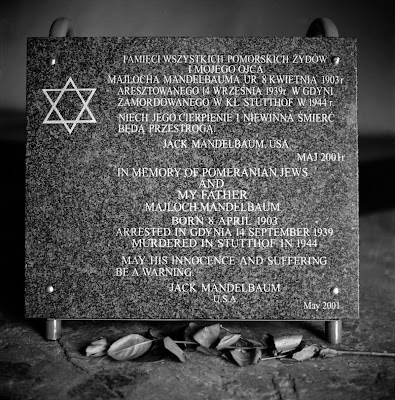 Over the weekend, Pope Benedict XVI lifted the excommunication of Richard Williamson, a British bishop who denies that Jews were killed in Nazi gas chambers and has resisted the reforms of Vatican II. Click on this link to watch part of a disturbing interview with the bishop.

Jack Mandelbaum is a friend of mine. He's a Holocaust survivor and the co-founder of the MIdwest Center for Holocaust Education. Jack helped me with the arrangements for my trip to Poland in 2003 when I was working on the photographs for Among the Ashes. This morning his "letter to the editor" about Richard Williamson's views appeared in the Kansas City Star:

I must respond to Bishop Richard Williamson’s claim that not one Jew died in gas chambers (1/28, A8, 'The defense doesn’t rest; Vatican stresses pontiff’s record of denouncing the Holocaust'). He also claims there were no gas chambers. Oh, how I wish he was right.

I am the sole survivor of my immediate family. If his statement were correct, my mother, age 42, my sister, age 17, and my brother, age 10, would have died of natural causes in old age. Instead, their lives were smothered in the gas chambers of Auschwitz and Belzec. After suffering the horror of Stutthof concentration camp, my father was also murdered.

The above photograph is one I took for Jack when I was photographing at Stutthof. It is a memorial stone he placed in the former gas chamber itself.
Posted by Gloria Baker Feinstein at 11:58 AM

Hi Gloria
I was in a Catholic Church this past Sunday and began to listen to a sermon about this issue. Much to my disappointment Bishop Williamson's Holocaust beliefs were never mentioned, instead Pope Benedict was praised for "bringing the bishops back into the fold". I was furious. In all fairness, the speaker was viewing this as a good sign that lifting the ban of excommunication for this denier may be a sign that all excommunications may be lifted or not imposed for the more liberal of us. (Yeah right)
I just sent him your blog because the omission was unconscionable and it needs to be rectified.
SM