Currently there's a Nicholas Nixon exhibition (Nicholas Nixon: About Forty Years) at the Fraenkel Gallery in San Francisco. There's also an Emmet Gowin exhibition in my home town of Kansas City. The men represent two of my most adored photographers.

Nixon was asked by the folks at Fraenkel to talk about an image that has had an impact on him as a photographer. He chose one by Gowin. 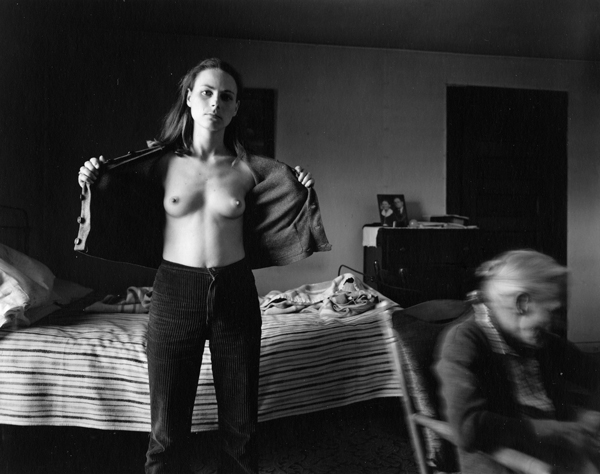 And here are his words:

Emmet Gowin’s picture "Edith & Rennie Booher, Danville, Virginia, 1970" is a modern version of a story told in many languages and mediums all through history. Youth and age and time and death, transience contained within a frame. A cautionary tale. It tells us to live fully while we can.


Edith is so present in the moment that we are stunned by her force.

What she is offering is her whole strong self, meeting Emmet and the viewer with a loving fierceness, her physical body a testament to this time, this place, this light. Her regard is at once electric and kind.

The bed behind is sagging, covered with a striped sheet and clothes to be tended to.  The picture on the dresser of a man and woman (Edith’s parents? The old lady’s children?) confers continuity, approval. These are the familiar artifacts of ordinary life.

That her grandmother seems to be already passing out of the world makes the story ancient, heartbreaking, and wise. Rennie is as ephemeral as Edith is present. The frame of Gowin’s photograph has unified their being in the same moment in time.

The grandmother has already lost her identity as she moves, well loved we assume, off the stage. Edith is here, now beautiful, sexual, and strong, and at the same time we see her as a timeless player of a drama that most of us play throughout our lives.