That would indeed be me.

Not only do I get to do what I love every day of the week (lucky) and take trips like this to Africa (very lucky), but I am surrounded by amazing friends and family (extremely lucky). I have received the most wonderful e-mails and calls over the course of the past week. I’ve heard from my tenth grade history teacher, Ellen, who never fails to cheer me on when it comes to my work and new projects. I’ve gotten an array of good book recommendations, a proposal from my niece, Elayna, to send children’s books to the orphanage, offers to carry my camera equipment while in Africa (!!) and just sweet, supportive, enthusiastic greetings from many. One that struck me as especially beautiful is from my dear friend, mentor, mother-figure, and true inspiration, Joan. This is what she wrote:

"Your e-mail sent shivers thru me. It sounds so incredible, and you are so the right person. I wish I could carry your camera equipment for you!!! I have no suggestions. We were on a safari and that is different than what you are going to be doing. I loved the light and the vistas as well as the animals, and of course the people are beautiful and stately. It is a harsh life yet they seem to find some peace within themselves. Of course, color is everywhere, and maybe that helps with the cruelty they see and suffer. Music is powerful, and maybe you can bring some music into their lives. Women respond to women, and music is a wonderful way to talk. I am so thrilled for you and I wish you good luck."

My very special family and friends serve as a constant reminder of just how much of it (luck) does come my way. For all of this, I am very grateful.
Posted by Gloria Baker Feinstein at 11:58 AM 1 comment: 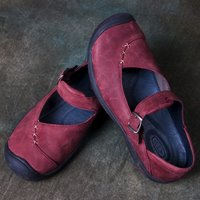 The purpose of this entry is twofold: I’d like to talk about my new shoes, and I’m going to attempt posting a photo.

Those of you who know me and see me on a regular basis know that my shoe inventory consists of several pairs of shoes - one brand and two colors only. I wear brown Dansko clogs or boots one day, then switch to black Dansko clogs or boots the next, then back to brown, back and forth, and back and forth. I recently made the decision to purchase a new pair of shoes for my trip – a pair of really comfortable walking shoes. And I decided to step out of the Dansko box.

Now I have been working on a project for the Heart Association the past few weeks. I have been making portraits of women who have survived heart disease. I am asking each woman to wear an accent of red for the sitting. For the final print, I desaturate the image to black and white, leaving the red intact. Now you may wonder what this has to do with my shoes.

I bought a pair of red shoes!!

I have been seeing red everywhere. I grew up with dogwood trees in our backyard and have, for the past nine years, admired and loved the three dogwoods in our front yard on 58th Street. This year, for the first time ever, I have noticed bursts of red berries all over one of them. Have I missed this display all these years?

I noticed that a single red impatiens had popped up out of the ground in an area where we planted none this summer. Go figure.

Anyhow, now I will try to follow the directions Abbie gave me to post a photo – my new red shoes…
Posted by Gloria Baker Feinstein at 7:06 PM 2 comments:

Uganda is located in Eastern Africa. It is landlocked, bordering Kenya, the Sudan, the Democratic Republic of Congo, Rwanda and Tanzania.

There are 24.7 million people living in Uganda. The population of those under 15 years of age is 13 million. Of those, 2.2 million have lost one or both parents to war or AIDS.

Uganda was, at one time, at the epicenter of the AIDS pandemic, but it has achieved a dramatic decline in its HIV prevalence rate to 6% from over 20% in the late 1980’s. This sounds like great news, but even as new infections decline, the number of orphans rises because of the time lag between infections, sickness and the death of parents. According to a UNAIDS report from 2004, the whole of Africa has 12 million orphans today and will have 18 million by 2010.

Having gathered this kind of information, I have decided that the photographs I make during my two and a half week stay will focus on an AIDS orphanage in Kampala, the capital city, and the city in which I will be based. I have made a connection with a school there that houses about 100 orphans. The director, Michael, has been welcoming, helpful and kind as we correspond via e-mail, and is willing to let me make in-depth images of some of the children. In exchange, I will provide the school/orphanage with some of the photographs I make so that they can use them for educational and promotional purposes.

Because the emphasis of the workshop is documenting NGOs (non-government organizations) I have also made contact with an organization called “Concern for the Girl Child.” This NGO works to improve child welfare, equal opportunities for women and children, and deals with sexual abuse and other forms of exploitation. I have begun a dialogue with Richard, one of the social workers there, and he seems to think I could do some work with their group, as well. Both he and Michael seem to be incredibly warm, thoughtful and generous, and I feel as if I am about to meet some truly amazing people.

Thanks to all of you who e-mailed me with travel- to-Africa tips! I have started a new list of things to pack now, including toilet paper, granola bars, peanut butter and Pepto- Bismol. Thanks to my good pal Mary Jo, I have made reservations at a lounge at Heathrow so that my eight hour layover will consist of a comfy sofa, good food, a gym and, yes, spa treatments!!
Posted by Gloria Baker Feinstein at 11:43 AM 1 comment:

Preparing for this trip has been exciting and very time consuming. The list of things to do goes on and on, but I think I've made a lot of headway and am beginning to feel like I'm ready. I've had my shots, invested in Immodium and Cipro, gotten my visa, registered with the US State Department and bought some cool travel clothes that are wrinkle resistant, insect proof and very comfortable. I've managed to put together an array of travel accesories that includes an alarm clock that doubles as a nite lite, a leatherman knife (on loan from Max), a snazzy mini flashlite and all sorts of hand sanitizers and medical kit supplies. On the technology front, I'm fully loaded with digital camera batteries, compact flash cards and a flashy orange external hard drive. What's left to do? I have to insure all my stuff and get medivac insurance, as well. I have to firm up the project I'm going to work on (more on that later.) I need to get to the bank and put together a few NEW $50 and $100 bills - something to do with a forgery scam... money exchangers in Uganda actually pay a lower exchange rate for bills minted prior to 2000. Last but not least, I need to clear off my lap top hard drive to make room for all the new pictures I'll be taking!

There are twenty people who have signed up for the workshop, which was declared full a couple of months ago. There was so much interest in this that the Maine Photography Workshop is considering offering another Ugandan journey in the spring. The class roster includes photographers, filmmakers, art teachers, art directors, graphic designers and artists. They come from England, Canada, Germany, Guatemala and the US. Our instructors are Thatcher Cook, a photographer and world relief specialist who hails from Maine - this will be his second season in Uganda - and Bill Megalos, an LA based documentary filmmaker and NGO specialist, who also teaches film at USC.

We'll be based in Kampala. I'll have a cell phone that should come in handy in case of emergencies. I can give the number to those of you who'd like it later on. Of course, I'll be checking my e-mail, so please write.

I will use this blog as a place to record my thoughts as I get ready to leave, but most important as a journal once I'm in Africa. I will try to figure out how to include photos, too.

If any of you have been to Africa - and I know you're out there - please send me any travel tips you might want to share.
Posted by Gloria Baker Feinstein at 5:20 PM 1 comment: