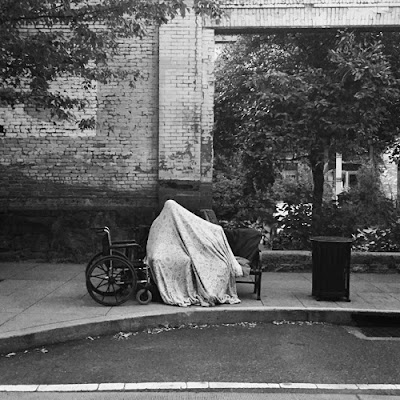 While in Portland each summer, I try to shoot every day. Often I wander the city for hours, observing, appreciating and sometimes photographing the many colorful characters who inhabit this city.

Yesterday, for example, I walked 9 miles with my photo gear in tow.

Two mornings ago I had to take Eddie to the airport at 4:30 a.m. When I got back to our neighborhood and was a block away from our place, I noticed a couple sleeping on a bench. It's very common in Portland to see people sleeping on sidewalks, in doorways, under bridges and in the parks, but this couple really moved me. I'd seen them there before on one other early morning walk I had taken. They sleep sitting up, one leaning on the other, and they drape themselves in a blanket. One of them must use a wheelchair, because it is kept very close by.

Friday morning, having just said goodbye to Eddie for a few days, I was particularly moved by the love these two share and the obviously challenging circumstances under which they live. It was still pretty dark out, and the only camera I had on me was my iPhone, but I really wanted to make a picture of them.

I took two frames and then decided to run up to my place and fetch my bigger camera before they awoke and moved on their way. When I returned a few minutes later they were still under their blanket, but they were starting to rouse, and it was clear they would be waking soon. So I left.

The picture from my iPhone just didn't feel like it did justice to the beauty, sadness and poignancy of the sleeping couple, so, while I did have that, I really wasn't satisfied. For the next two mornings, this morning included, I set my alarm for 5:30 a.m. and walked back to the bench with my Hasselblad to make the picture I really wanted.

But they weren't there.

This morning I even walked a couple miles around the neighborhood searching for them. I never found them.

So, the picture I already made will be the one.

People often ask me which is my favorite camera, and I always tell them it's the one I have on me.


Posted by Gloria Baker Feinstein at 8:58 AM