Many moons ago I was interviewed by Russell Joslin for a feature in Shots Magazine. That was issue #75. Russell has just published issue #131. It landed on my doorstep a couple days ago.

I must admit that, sadly, I have not subscribed to Shots for a few years now. Yes, I let my subscription lapse, but I recently renewed it! I'm really glad I did. Issue #131 features photographs of children; there are some lovely images, nestled alongside two very good interviews, one with Leon Borensztein and the other with Joseph-Philippe Bevillard. Russell has continued his quest to get good work out there, and he's doing an impressive job. In this Spring issue are photos by, among nearly 50 others, Tytia Habing, Angela Bacon-Kidwell, Rania Matar, Suzanne Revy and Stephen Shames. I am happy to say he included one of my pictures, as well. It was fun to submit work to Shots once again and to be part of this good-looking, provocative collection of images. The cover image below was made by Kathryn Oliver. 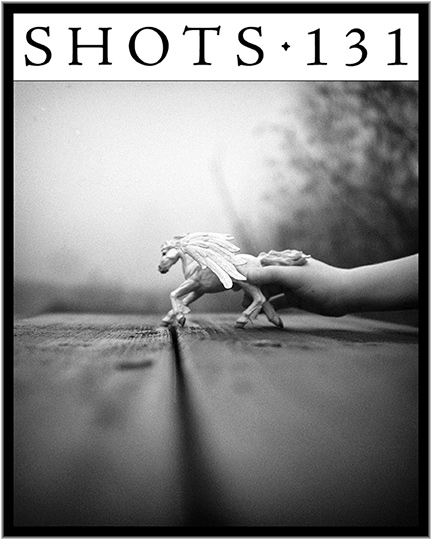 Here's a good description of the magazine, taken from the website:


SHOTS Magazine is an independent, reader-supported, quarterly journal of fine art photography in its 28th year of publication. SHOTS is known for its democratic presentation of work by a variety of photographers from around the world. Often described as a “photographer’s photography magazine”, SHOTS reaches a wide, international audience that includes not only photographers, but also educators, gallery directors, museums and others interested in photography.If you are someone who enjoys photography, or if you have some work you would like to share, SHOTS may be for you.

And here is the scoop on Russell, also taken from the website:

Photographer Russell Joslin has been the sole Editor and Publisher of SHOTS since 2000 following the tenures of Robert Owen, and founder Dan Price. Since then, Russell has published nearly 60 issues and has interviewed over 125 photographers for the pages of SHOTS. In addition to his duties directly related to the creation of SHOTS, he has served as a reviewer for the following organizations: FotoFest (Houston), Photolucida (Portland), PhotoNOLA (New Orleans), SPE, Filter Photo (Chicago), PhotoMidwest (Madison) and Positive Focus (NYC). Russell has also acted as a juror for a number of photography competitions including the IPA/Lucie Awards and has curated photography for exhibition. In 2014, he authored Black Forest: Four Visible Poems available from Candela Books.

Here are a few images from the Children issue:

If you're not a Shots subscriber, become one! If you'd like to try to get some work published, send it along to Russell! There aren't many opportunities like Shots. Visit the website for more info.

Posted by Gloria Baker Feinstein at 11:52 AM