At the opening of my Barbershop show last week, I met the wife of Kansas City Mayor Sly James. We had a nice conversation about various things, and then she suggested that I go to Sly's barbershop and photograph him getting his hair cut. It was a place I had not been to yet and was glad to learn of another old-school Black-owned shop. When we parted, we exchanged email addresses, and she told me she'd give me a heads up next time the Mayor needed a cut and shave.

I decided to go to the barbershop in advance to check it out. It was indeed a very cool, older shop. I spent an hour or so chatting with the owner and photographing the 73-year old who was in his chair.

Here is my favorite. 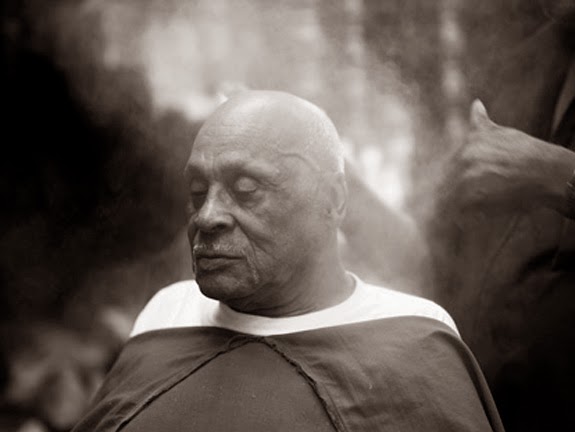 I was interviewed for an article about the show this past week (I think it's going to be in next Thursday's paper). I found myself talking about the fact that I love when an image transcends the actual real thing that is going on. When I manage to make that happen, I am a happy camper photographer. Keith Carter put it this way during a critique I was having in one of his workshops: "Gloria, don't SHOW me what's happening. Make me WONDER what's happening."

That's sort of hard to do when you're approaching a project from a"documentary" style, but still I long for those images to present themselves every now and then no matter what I'm working on.

At the very end of the cut and shave, the barber sprayed his client's head with a product that promotes "shine." This has happened at every single haircut I've witnessed since I began the project. So, I know to be ready and to prepare myself for that grand finale - and I can only hope I'll get something interesting. Something that doesn't resemble a man getting his head sprayed while he's sitting in a barber chair. Something that becomes something else entirely. It's luck, really, because I can't actually see his face for all the aerosol that's raining down. I can only hope that the photo goddesses are smiling down on me for those few moments.

In this case, I think they might have been :)

I love that quote! This photo make the quote come alive.
Louanne

Your stories and images lift and inspire me so much.