My friends who live on the east and west coast have been emailing and calling for days: Have you seen the Vivian Maier movie yet? You must! Unless I hop on a plane, I have to wait until it makes its way to the heartland, which will finally happen this Friday. I've been patiently waiting.

The following article by Abigail Solomon-Godeau, published in "Jeu de Paume" superbly addresses the complexities of this photographer and her work. If you've found yourself interested in Vivian Maier, make yourself a cup of tea or coffee and give it a read.

First she was found, as announced in the title of one of the two documentary films about her (Finding Vivian Maier), but now it can be justly said her life now requires posthumous invention. And, for the most part, this invention is necessitated by Maier’s voluminous production and its entrance into the photographic marketplace. This, however, is only one of a number of issues raised by both her life and work. As it happens, her job as a nanny – an explicitly gendered profession – was itself an occasion for much of her photography. It also risks becoming a branding moniker: Who Took Nanny’s Pictures? is the title of the BBC documentary, and citing the now-adult children she once minded, the news media have likened her to Mary Poppins. Looking at her many self-portraits reflected in mirrors and windows, there seems very little Poppins-like in her dour, impassive features. Nevertheless, despite the unknowability of this deeply secretive woman and the many lacunae in her biography, her new-found fame as a so-called street photographer, requires a story, a narrative, a way to link the life with its massive production.

Thus, the recently excavated photographs, negatives, Super 8 films and videos made by Maier raises these questions and more. Few lives in the modern urban world have been lived so far under the radar as to produce barely a trace of the subject, even after diligent research. For most of her adult life, she worked as a nanny, governess or caregiver in the suburbs or towns around Chicago’s North Shore (ca 1956-1980s). She seems to have discarded nothing she ever possessed; among her effects beside the photographs were found clothing, shoes, old newspapers, books, albums, memorabilia, and – importantly – professional darkroom processing receipts. She never cashed in her tax reimbursements, becoming effectively indigent by 2007. Thus, and with respect to her now celebrated corpus, it was only when the contents of her storage lockers were auctioned off for nonpayment that the story of her discovery begins.
Born in 1926, from the late 1940s until some time in the 1980s, she photographed her surroundings and their inhabitants obsessively – there is no other word that adequately characterizes her enterprise. An elusive figure in virtually all respects, the facts of her life and work are gradually being reconstituted, a task involving genealogists, photographers, archivists, documentary filmmakers and other specialists. This itself attests to her obscurity and reclusiveness. After 1956, living always in the homes of her various employers, she nonetheless maintained a vigilant personal privacy, all the more astonishing for its separation from the bustling family life that surrounded her. With neither family nor friends, in her final years her sole financial support was provided by the Gensburg family, for whom she worked longest and who paid for her studio, In 2008, already elderly, she slipped on the ice and although she was expected to recover, after being moved into a nursing home, four months later she was dead.
It is therefore somewhat remarkable that so soon after her death, there are now two feature length documentary films, three monographs, several websites, some with short videos, and a growing number of collectors and commercial galleries all collectively functioning to catalogue, print, scan, publicize, exhibit or sell Maier’s work.2 In other words, we are looking at the ongoing labor of many players, with various investments, all engaged in the process of manufacturing a reputation ab ovo. This is an extremely interesting process to observe, and in the context of my discussion here, it is not especially important if it is artistically merited or not.
Consequently, even as the biographical facts of Maier’s life are fleshed out, the central questions raised by Krauss are even more dramatically foregrounded given the scale of Maier’s extant archive. The collection of John Maloof consists of 100,000 to 150,000 negatives, over 3,000 prints, and also hundreds of undeveloped 35mm Ektachrome film. The collection of Jeffrey Goldstein, one of the purchasers of her auctioned effects, consists of 16,000 negatives, 225 rolls of film, 1,500 color slides, 1,100 vintage prints and 30 16mm home movies.3Ron Slattery has most of the original prints and some negatives. Goldstein has estimated that Maier produced about 50,000 images for each decade of her active life.4 Only a small fraction of her negatives were ever printed, either by Maier (who for several years had used her bathroom as a darkroom) or later, her commercial printers.


In those pictures where her subject is clearly aware of the camera and willing to be photographed, they are overwhelmingly children, the elderly, minority or marginal adults (e.g., skid row denizens, the very poor, etc.). This is not unproblematic. Although photography critics and historians frequently babble on about humanism, empathetic identification and other alibis for both “street photography” and documentary, at least since Martha Rosler’s classic essay of 1981 there has existed a rigorous critique of the implications of posing the camera downwards.13 In other words, issues of power, of subject-object relations, and exploitation, as well as those of class, are inescapable aspects of what might be called the ethics as well as the politics of photographic representation. How or should we consider Maier’s practice in relation to such issues?
Of what has thus far been seen of Maier’s pictures, there appear to be few pictures of beautiful women or handsome men (there are some exceptions, but they are exceptions, unless this itself reflects editorial choices). On the other hand, there are many pictures of unconscious subjects (as well as unwitting ones), many back views, and many fragments of bodies. This suggests a gendered position inasmuch as it takes certain assertiveness, if not aggression, to photograph people without their permission. The expression of affront or annoyance on the face of certain of the bourgeois elderly women in Maier’s pictures makes evident their displeasure at being so taken, as it were, off guard. One of the camera shop employees where Maier processed her film remarks that she didn’t like women who were “made-up,” or “too feminine.”14Thus, while certain of her photographic subjects can be said to be participating in a social transaction, there are also numerous instances of what Henri Cartier-Bresson characterized as the camera’s “pounce.” 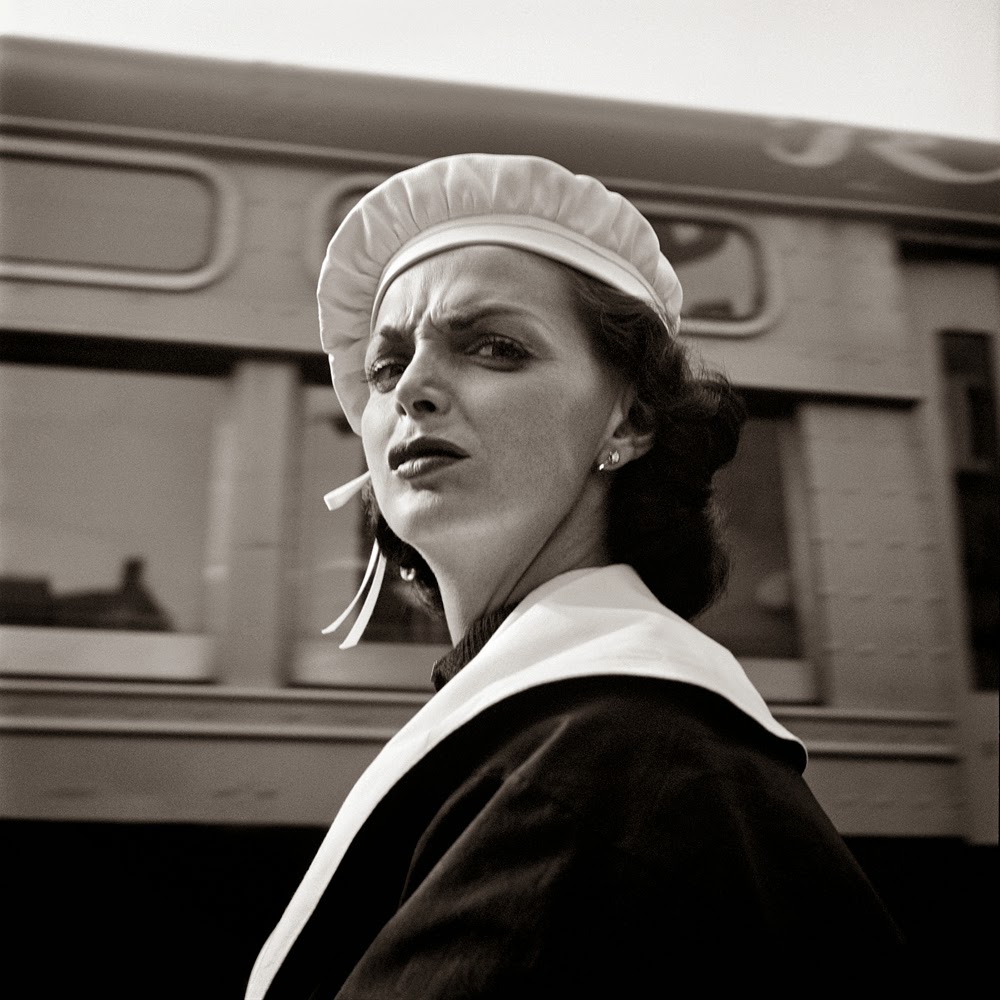 Here we might distinguish between her self-portraits and her self-representation, for while all portraits are self-representations, not all self-representations are portraits. Specifically, I refer here to the many photographs in which her unmistakable shadow looms across the scene before her viewfinder. This is, as is well known, a recurring trope in modernist photography; indeed, Lee Friedlander produced an entire book around this device. Which in turn suggests that Maier had been much more aware of the photography of her contemporaries than is acknowledged. Among her archives are a number of photography books, and during her many visits to NYC, she could well have popped into MoMA, where photography was continually exhibited. Perhaps the assumption of her unfamiliarity with contemporary work, even ignorance of it, is thought to burnish her reputation further. As for the self-portraits, it is their implacable opacity, and occasionally striking formal invention that place them into a different category than the more conventional imagery she made in the street. 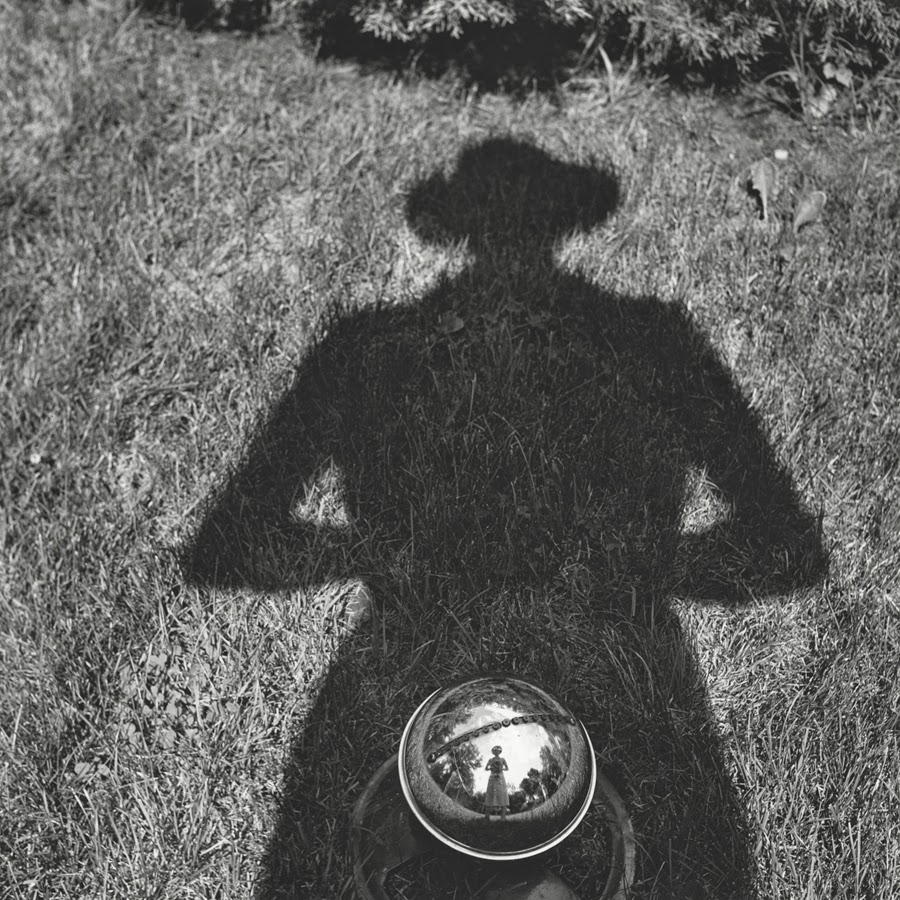 As of today, (2 September 2013) a new story about Maier’s work has emerged from the blogosphere. It appears that even as what Jeff Goldstein referred to as the “Vivian Maier business” appears to prosper, there exist potential legal issues around copyright law. According to her post entitled “The Curious Case of Vivian Maier’s Copyright” by Julia Gray, it is possible (although evidently unlikely) that the state of Illinois could claim at least some of the profits from the sale of Maier’s archival prints or reprints from her negatives. The gist of which is that the state of Illinois might have claims on the sale of her prints and reprints of her photographs. Having died intestate, normally all her belongings or property would go to relatives no matter how far distant. Absent these, it would revert to the state. But the situation is extremely complicated legally; especially because the contents of the storage lockers were purchased while she still lived (2007). Consequently, Grey describes multiple scenarios, although all are predicated on the willingness of the state to prosecute the current owners or stakeholders. One option, Gray writes, is that “the state could decide that instead of a cease and desist order, the current owners may continue selling her work but that royalties would be collected by the state. In this instance, the state could pit the owners against each other, depending on who will pay the state more royalty money. Finally, if the current owners don’t cooperate, the state could sue them in federal court for ownership. However, before a lawsuit could proceed, the state would have to obtain the copyright.” However, the probate papers do not mention what is called intellectual property — the copyright on both printed and unprinted photos. Nor is there any copyright of her work registered with the United States Copyright Office. All of which suggests that it is unlikely there will be any real consequences for those involved with the Maier enterprise. Which is by no means to imply that this would be a desirable outcome. But it is here, however, where one can see how the terms of an “aesthetic” discourse within the world of contemporary photography, turning on the individual author and her work, and the far less lofty realities of market and marketing, property relations, public relations, media relations and all the other apparatuses, illuminate one another, or even collide. “Her big project,” remarks Michael Williams, “was her life,” but perhaps the even larger project is her posthumous invention.

Posted by Gloria Baker Feinstein at 8:31 AM