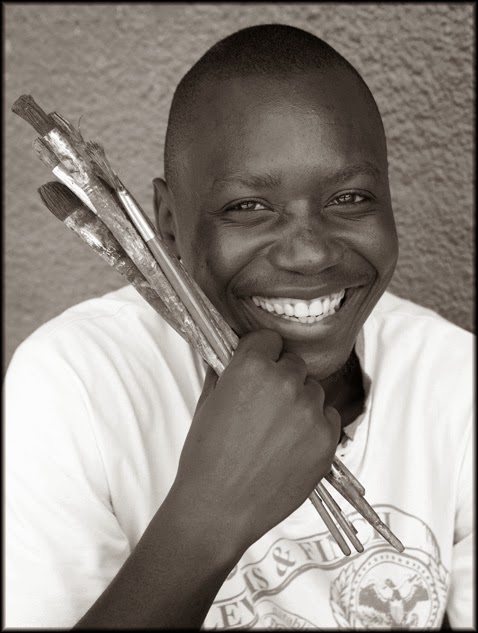 Have you ever wondered who teaches and encourages the talented young artists year round at St. Mary Kevin? His name is Michael. He is humble and gentle, so very sweet and kind. He teaches the children important skills and techniques, but he knows when it's time to step back and let them blossom on their own. He is like a big brother/father to all of them.

When young Brian was injured in a terrible accident a few years back, Michael immediately made his way to the hospital to sit by his side. When I looked over one time to see the Okecha brothers and Michael huddled around Brian, it was a beautiful thing. Like a family, he told me.

Michael is a talented artist, but he never flaunts that fact to the children… or to anyone for that matter. He is easy-going and polite. He is respectful of the kids. He takes his time with them, allowing them to make important discoveries about their own artistic possibilities - and about themselves as human beings, too. A better role model would be hard to find.

I am proud to call Michael my friend. I have loved and admired him for many years now. The fact that he comes to SMK on a weekly basis to teach - and receives only transport money in return - says volumes about the size of this man's heart.

Here's Michael's story in his own words:

Michael Stanley Kolulye is my name. I was born from a family of 13 and am the fourth but the 1st born of my Mum. I grew up in a simple home in Ngogwe my beloved grandmother. This SPECIAL lady nurtured me since my mum was always on the move for her business ventures. After completing secondary school, in August 2005 I joined Kyambogo University for a Diploma in Education Secondary (Art & Design), it was a fun because I was doing some thing I liked from childhood. If I didn’t do Art & Design, I dreamt of doing Engineering/Architecture. I started teaching 2008 after my last school practice, I continued with my students and some graduated last year.

I came to know about the existence of St. Mary Kevin through a friend, Peter Damba. He used to talk about the place with great pleasure that I wanted to know more about the place myself. I called Mummy Rosemary and we met at her office in Kajjansi in 2008. She was a busy lady but gave me a chance after listening to my proposals. She took me to the school and introduced me to some people. I remember it was in the afternoon, she told me to start straight away if I could. Our first class used to be at the verandah of the Guest house near Mummy’s office. My first day went well though I left without seeing/reporting to Mummy because it was getting late & I could not find her. To my surprise, Mummy called to find out where I was only to tell her that I had left thinking that she was off campus. She tried to explain as she was busy with the kids at school. I remember asking me if I could come back to fetch transport money. This (phone call from Mummy) gave me much joy & determination to come back. I decided to come every Wednesday for the young kids & Saturday for bigger boys projects. There were a lot of difficulties but I believe the spirit I had in me & the fire I saw in the young kids kept me alive. I myself I never got a chance to try out the talent in me at an early age, & whenever I thought of this it renewed my interest in sharing with the young lads. Now I feel proud whenever I look at them all grown up with their talents & skills.

Right now I am devoting much time into promoting my small business of Graphics Design, printing & commercial/advertising publications. I have two kids Ryan & Renah. Ryan now goes to school & he is doing well in Nursery/Pre-Primary.


Posted by Gloria Baker Feinstein at 10:37 AM

Story well told,
Thank you very much.
Am also honored & feel proud working with you & the entire CTT team.
To me you are more than a friend,all I see is a Mother.
Love you,
Michael.