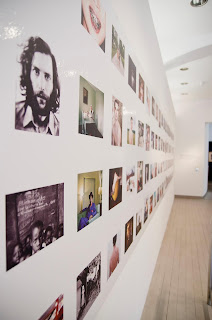 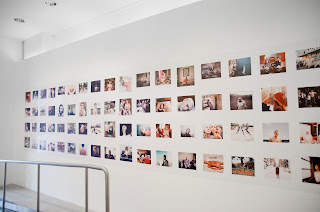 For the past five years editor Andy Adams has been been publishing FlakPhoto, a website that promotes photography from within the online photo community. In November 2010, Adams teamed up with curator Larissa Leclair to produce a photo projection for the FotoWeek DC Festival of Photography. It screened simultaneously at several non-traditional exhibition venues: on the exterior of the Corcoran Gallery of Art, in the Satellite Central projection theater and on screens fixed to trucks traveling throughout the streets of the city. The project(ion) was called "100 Portraits - 100 Photographers." I talked about it some time ago in this post.

The screening has subsequently been shown at the "Head On Photography Festival" in Sydney, "Snap!", "Celebrate the Photograph" in Orlando, and the "New York Photo Festival" in Brooklyn.

"100 Portraits - 100 Photographers" received its first physical exhibition this summer at the Australian Centre for Photography in Sydney, Australia. Andy, one of the hardest working guys I know, recently shared these photos of the installation with the other 99 photographers and me.

I'm really proud to be part of this exhibition.

Watch this cool installation video of the show in Sydney.

Posted by Gloria Baker Feinstein at 10:27 AM