Monday morning I will be a student once again. It's been a long time.

At 9:00 AM I'll be reporting to a classroom in the graduate school of of Journalism at CUNY. I'll be a student of James Estrin, senior staff photographer and Lens Blog co-editor for the New York Times.

I met Jim Estrin in Santa Fe several years ago. I sat across from his portfolio review table, nervously  sharing my Uganda work with him. He said something like, "I shouldn't like this work, but I do," referring to the fact that he reviews/gets bored with a lot of work shot by non-Africans in Africa. After we talked about why he did like the stuff, I realized we had 10 minutes left, so I said, "I did bring along a second body of work, if you'd like to see it." It was my Estate Sale project, and he loved it. He published it a few weeks later on Lens Blog.

He probably won't remember me on Monday morning, but I remember him. He was an honest, straight-shooter of a reviewer. He was down to earth, personable and kind and willing to answer the many questions I had about the photojournalism industry.

I recently read that he was teaching a class called "Visual Storytelling" in New York. I applied, and when I was accepted I started researching stories I could tell (in five days in a city I do not inhabit) as a participant in this exciting workshop. Finally, today, I think I made a breakthrough with someone at a NY non-profit who (I hope!) is going to help set me up with a story. It's taken many days, many emails and phone calls, but I think I might be honing in on something. Stay tuned for more info about the photo essay I'll be making.

Here's a snap I took with my iPhone of James Estrin using his iPhone when he and I were standing next to each other at a reception during the Santa Fe Portfolio Reviews some years ago. 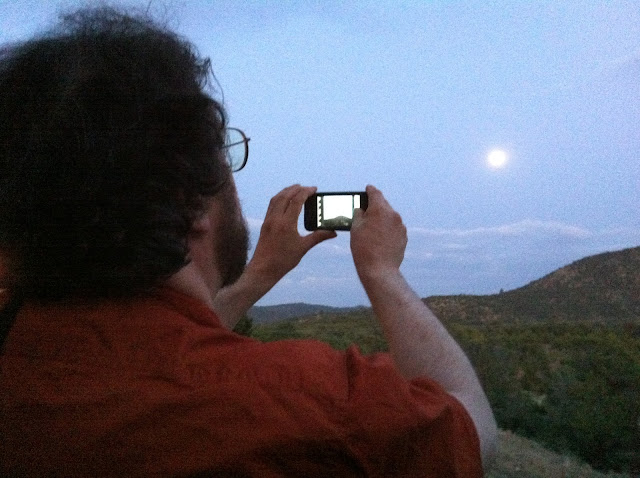 I think he will remember you... You made an impression on him if he published your images. I'm looking forward to finding out how this workshop will impact your life and how you will respond to it. This reminds me of the workshop you took in Uganda.

Fantastic! Can't wait to read about your experience and see the photos.
- Susan