I was invited recently to attend the lecture and book signing for Annie Leibovitz when she come to Kansas City next month to promote her new book. Sure takes me back…

Some of you may know that in the 1980’s I had a place called The Baker Gallery. It was in the days when collecting photography was just coming into its own, when important pieces by important photographers could be had for less that $500, and when well known photographers were accessible and approachable. The gallery became a meeting place for local and regional shooters – on Saturdays many could be found there, hanging out schmoozing, looking through the latest photo books, going through the flat files, buying postcards and posters, talking about their latest work. The tried and true Kansas City art collectors slowly came around to acknowledging photography as “art” and started to assemble interesting photo collections of their own. Every month, there was a new show, accompanied by a crowded opening with cheap wine and lots of good conversation. I started the gallery when my oldest, Abbie, was just a baby, in the living and dining rooms of our home in 1981 and soon relocated to 800 square feet of gallery space in a section of town known for its galleries and antique stores. I had no idea, really, what I was getting into – I just knew I loved making photography, I loved the history of photography, I loved collecting photography, and I loved educating other people about the wonders of it all. I showed many of my favorite photographers, of course: Diane Arbus, Helen Levitt, Cartier-Bresson, Robert Doisneau, Andre Kertesz, Imogen Cunningham, Joel Meyerowitz and Aaron Siskind, among others. The Baker Gallery was in existence for over ten years, and during that time I had the great pleasure of bringing some of the photographers I showed to Kansas City for their opening and for a lecture. It was a blast. Among those who graced the premises of the gallery were Judy Dater, John Pfahl, Nancy Burson, Marsha Burns, Ken Josephson, Annie Leibovitz, and even, Kertesz.

It was the Annie Leibovitz opening that really put the gallery on the map. Most of the people who frequented the gallery before Annie came to town for her opening and book signing were limited to serious collectors, photo enthusiasts and art students. After the big event on that cold winter’s evening in December of 1985, the gallery was known to just about everyone in town. Her images of pop culture icons brought people out of the woodwork! There were so many people who wanted to get a copy of her book and have her sign it that there was a line going all the way around the block. She had me crank up the music to deafening heights, she had her giant stamp pad placed next to the huge stack of books so that she could put her handprint on each one she signed, the press covered it, well, it was a pretty wonderful time. (By the way, Annie had an oversized stamp pad tucked away in her bag which she hoisted out once the opening reception finally died down. She took off her cowboy boots and proceeded to put both footprints on my copy of the book). 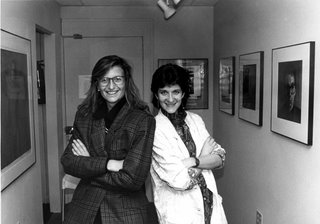 Those gallery days were heady ones.

Annie will be back in town in a few weeks. A lot has changed in the 21 years since I saw her last.
Posted by Gloria Baker Feinstein at 11:43 AM

I knew you had a gallery at one time but this is a wonderful story. Thanks for sharing it with us.