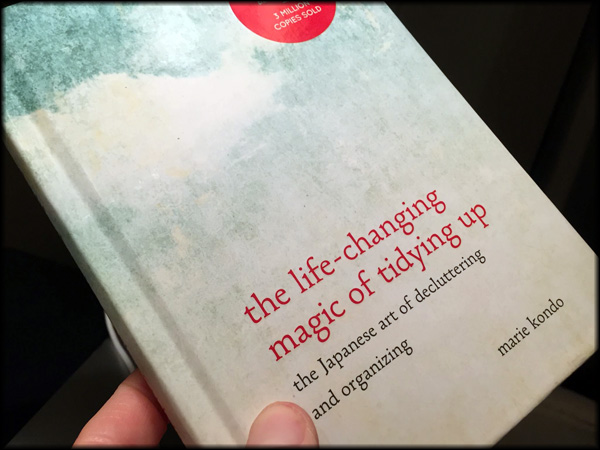 A couple months ago, at the suggestion of my daughter, I picked up a copy of a small, beautiful book called The Life-Changing Magic of Tidying Up by Marie Kondo. It's a New York Times best seller, and millions of copies have been sold. When I posted on Facebook that I was ready to dive into the art of tidying, many friends responded that their lives had been changed in great and profound ways by Kondo's method of decluttering. So, I've been eager to get started. Who doesn't want to make changes for the better, right?

I finally have time to dedicate to the book and the process. The book itself is so lovely, I feel better with each page I turn. Yesterday, though, it was time to get down to the nitty-gritty and start piling my clothes up on the floor.

That's the first step of the first step of de-cluttering. There are lots of steps involved, and for some reason I am very willing to follow Kondo's precise instructions. She puts the important stuff in bold, and whenever I encounter those things, I dutifully sit up and take notice. She has put me under some kind of spell, I think. Even though her tone is sometimes a bit arrogant, and her methods seem a bit whacky, I have - for some reason - signed up to follow the advice of this simple little book.

So, yesterday, I began. You have to follow her instructions in the proper order, or else all will fail.


The first thing you do is pile up every single solitary shirt, sweater, etc. that you own. This includes stuff that might be hiding in the laundry basket, stuff buried in the front hall closet, and if you have left stuff at your friend's house, forget about it. Anything that is not included in this initial piling-up is automatically headed for the discard pile.

OK, so once you pile everything up on the floor you then have to pick up each top, one by one, and handle it.

Here's the headline in bold, bold, bold: It must spark joy. If it doesn't, it is doomed for discardation (I think I made that word up.) If the top doesn't spark joy, you then express gratitude to said top for having been a good top over the years, a faithful and well-loved top. It's simply time to part ways. No hard feelings. Really, once upon a time I loved you. We went to London together that one time, remember? You were there when my daughter got married. That was important and memorable, and I thank you for making it such a special time.

One by one… I went through the entire pile. I spoke to the threadbare red t-shirt I had worn to countless aerobic classes back in the day when I could get through one of those loud, frenzied. high-stepping aerobic classes at Body by Schliebe. I caressed the misshapen green sweater I had accidentally put in the dryer a few too many times. I thanked my old favorite black jacket, and then I thanked its shoulder pads. I shed no tears, but I did make a rather huge pile of discardment.

OK, so then I had to instititue the Kondo method of folding, which differs greatly from my own. It involves tautness and neatness. And here's the really cool part: once properly folded, you set the tops in a draw on their EDGE (not in a vertical pile). This way, you can actually see every top you own, every single spark of joy, in one quick glance. Each one looks happy, joyful even. Each one looks eager to be worn, to cheerfully accompany you as you make your tea and then sit down at your desk.


The funny thing is, I have opened that drawer several times today just to kvel. The sparks of joy are flying all around me!

After tops, I tackled bottoms (pants, skirts, etc). Then "clothes that should be hung," and this is a limited group, believe me. Then socks (which you cannot ball under any circumstance), underwear, etc.

After a few hours, I was done. It was pretty easy!


I feel lighter, for sure. I'm excited to take my stuffed garbage bags to Operation Breakthrough to share what I no longer want/need. And I am kind of eager to take on the next set of steps, which involves books.

Yes, that will be harder than clothes.

Kondo throws in all sorts of bold do's and don'ts that are critical for tidying success. For example: do not show your discard pile to anyone, especially your mother. She will, undoubtedly, pull out that blue stripped, boat-necked top she gave you one time for your birthday and state, "you don't really want to give this away." Being talked out of anything to which you have already bid adieu? Apparently not such a good idea.

I was a little disappointed to read that you cannot listen to music while tidying, primarily because the new Bonnie Raitt album was just released.

I'll keep you posted as I move forward through the magic of tidying up. So far it's been really great, and I'm hoping once I get to "spare buttons" and "free novelty goods," I'll still feel the same way!

Labels: The Life-Changing Magic of Tidying Up