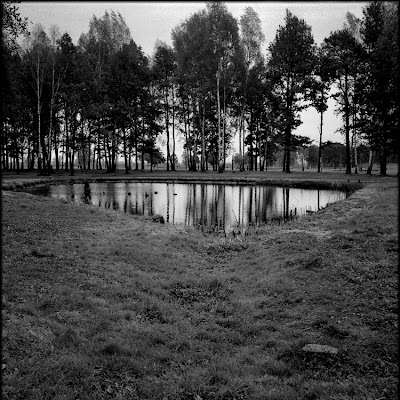 Pond of Human Ashes, Auschwitz-Birkenau Death Camp, 2001
from the series Among the Ashes

I had the good fortune to meet Mary Sanchez, a columnist for the Kansas City Star, a couple of years ago when we were judges for the White Rose Essay contest sponsored by the MIdwest Center for Holocaust Education. I thought her column that appeared in the Star on 2/27 was really interesting and definitely worth sharing:

"Lives Still Hang in the Balance of U.S. Policies -

I suspect I’m like a lot of women of a certain age who were obsessed with Anne Frank’s diary as a young girl. When little girls read Anne Frank, it is usually their first look at the evils of mankind. Devouring page after page, bonding with our new little friend, we’re horrified by the unwritten end. “She died!” my niece cried after she read the book as a 12-year-old.

Now, with the newly discovered correspondence of Anne’s father, Otto Frank, a new layer of tragedy has been added. Anne’s life, along with those of her mother and sister, might have been spared had U.S. officials granted the family visas. A nearly 80-page dossier of Otto Frank’s papers turned up in New York’s YIVO Institute for Jewish Research, evidence of a man’s desperate campaign to save his family’s lives — and a bureaucratic system that took little notice.

The bureaucracy in question was our own. Throughout 1941, shortly before his family was forced into hiding, Otto Frank sought permission to emigrate to the United States, enlisting stateside family members and influential business leaders to plead his case and to help pay the hefty fees. His efforts came to nothing.

This is the prologue of Anne’s story, the reason she ended up hiding in that 'Secret Annex' in the first place, spilling her girlish thoughts into a diary now among the most treasured of literary works.

Better connected and wealthier than most, Otto Frank could tap friends like one who was an heir to the Macy’s fortune. Otto did manage to get a visa to enter Cuba but was given only one, for himself. His wife’s brothers already lived in the United States, and both they and their employers did all they could do. But by early 1939, the waiting list for those visas was 300,000 names long.

As Hitler tightened his grip on Europe, the United States was curtailing access to coveted visas for those fleeing Europe — especially, it appears, for Jews. The United States expected soon to be at war with Germany, and the State Department believed German immigrants posed a security risk. By 1941, when Germany declared war on the United States, those with relatives in Germany were all but banned from immigrating.

We now know how tragic and wrong this policy was. By 1941, the Nazis had begun in earnest their genocide against the Jews in the East, but the fate of Jews in Western Europe was still in question. By 1942, Germany adopted the so-called Final Solution and built the gas chambers. In the brief period before Germany declared war on the United States, how many European Jews could have escaped had America opened its doors to them? How could U.S. officials have failed to admit them, knowing what was in store?

Otto Frank’s case forces us to consider these questions. It also ought to add complexity to how Anne Frank’s diary is taught. The book is usually assigned to teach tolerance, a relatively simple story of victims and perpetrators. We’re content to let preteens connect with Anne as she stews about fights with her sister, bristles at her mother’s scolding, and peers out, perplexed, at a frightening and hostile world. Hers is a timeless tale of youth convinced it will never be understood.

Yet there is a disconnect for children reading the book in the warmth and safety of their own homes, at their neighborhood school, or, as in my case, tucked into bed, huddled against curfew with a flashlight under the bedcovers. Anne’s world was long ago and far away, and things are different now.

We’d like to think that with 24-hour cable news and countless blogs, and with all the human rights organizations active today, such horrors could be stopped. If we just knew, we’d rise up in protest, right?

But then there is Darfur. And New Orleans. And our government pulls an innocent Canadian citizen off a plane and bundles him off to Syria for a year of torture. The man is a Muslim and his name is on a list. Suspicion is justified not by deed but by his identity. National security is at stake.

Her father’s letters reveal that, however indirectly and unintentionally, U.S. policy sealed Anne Frank’s fate. Explaining that to young readers may help them to think differently about horrors they see in the news every day. And, maybe, it will change how they react."

Labels: Among the Ashes, holocaust survivors