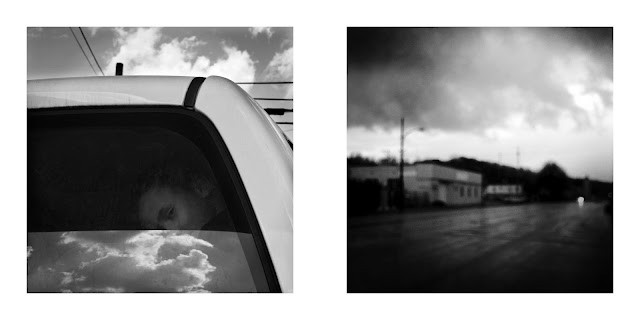 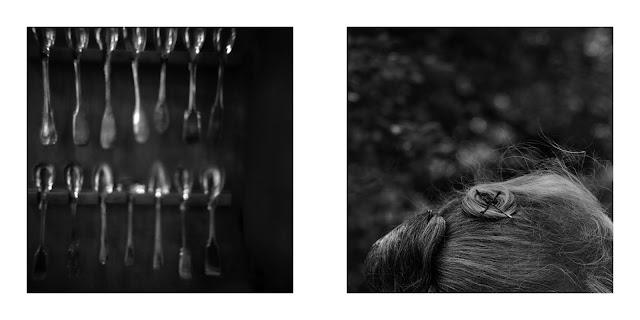 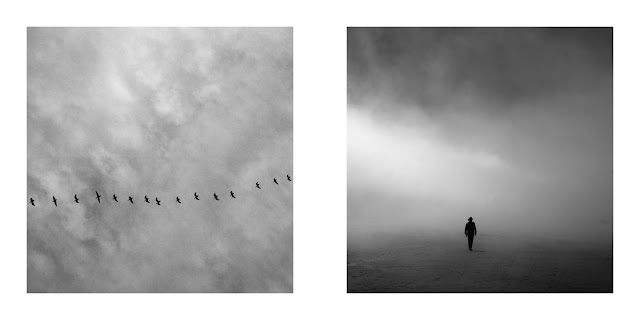 There are consistencies in the images I’ve made over the years. I chose to accentuate this point when assembling the work for the current Snapshot Gallery exhibition.

Some of the threads that run through my photographs simply relate to form and are geometric in nature. Working in the square format, I am always deliberately and carefully placing lines and shapes in such a way as to offset the inherent symmetry of the four equal sides. I was delighted to discover that when pairing many of the images, those structural relationships became quite obvious and easily played off of or strongly emphasized one another.

Content also plays a role in the relationships I’ve established in these diptychs. While mindful not to attach too much meaning to the pairings (as I prefer to let the viewer come to his/her own conclusions) there are obvious connections; it was easy to extend the open and airy space of “Eddie, Cannon Beach” by placing it next to “Snow Geese, Mound City.” Putting the hidden figure in “Boy at Window, Royalton, Kentucky” next to the hidden figure in “Clothesline, Linn, Missouri” points to recurring themes in my work – loneliness and mystery – and suggests a myriad of possibilities as to how the two pictures might relate to one another.

Finally, it was by means of abstraction that was I was able to place some of the images together in conversation. “Leaves, Aspen, Colorado” and “Girl in Bubble, Faribault, Minnesota” are images that began to look very similar to me.  They are each removed from reality just enough to allow for obvious “first glance” relationships, but the dialogue with one another begins to touch on my own personal questions about things like birth and death, and the relationships between earth and sea and humankind and nature.

These images can and do stand on their own; placing selected ones side by side is just one way of bringing into focus certain aspects of my own approach to seeing – and considering them in new ways.